Mornings unravel to birdsong and a riot of bright green

Just before Bali closed its borders, Narina Exelby returned to her home in a coastal village for a lockdown like no other 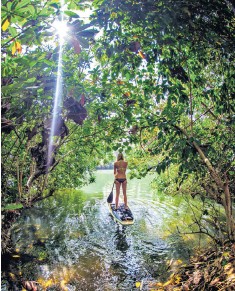 Just before the sun’s rays first touch the earth in my Bali garden, they create a magnificent scene. The air, you see, is so softly hazed with wood smoke from neighbourhood kitchens that sunlight is broken into radiant strands as it stretches down through the palm trees and mango branches. A tall hedge of gardenia, banana, jasmine, bougainvillea and heliconia leaves blocks out much of the light but the foliage has become a kaleidoscopic riot of luminescent greens. I have had the privilege of watching days begin this way since mid-March, when my life of regular travel skidded into an unusual stillness because of the worldwide coronavirus crisis. A week before Indonesia closed its borders completely, I returned to my home in the coastal village of Pekutatan, among the trees of west Bali in Indonesia, where life unfolds in much the same way as it has for generations. Out here we are at least two hours’ drive – and a world away – from the usually busy (and more familiar) tourist haunts such as Canggu, Kuta, Seminyak, Nusa Dua and Ubud. As the streets in these prominent holiday areas emptied and Bali shut down to tourism, many islanders returned to their villages. While those I have spoken with say they lament the lack of income from foreign travellers – which usually number more than six million a year – they, as I, are grateful to have returned to a place of such nurturing resources and natural beauty. When the extent of one’s world is suddenly measured in footsteps rather than air miles, “local” acquires a totally new meaning. From my door, I look out on to the hills where the coffee I drink every morning is grown; the beans are roasted just two roads west of my home. A three-minute walk along a narrow scooter track weaving beneath a grove of palm trees takes me to where a Balinese family is making palm sugar by boiling the sap over a wood fire. The trees open on to a wide green meadow and it is here that a handful of doe-eyed cows graze. The meadow reaches down to an empty grey-sand beach that stretches for almost nine miles. If the tide is right, three or four men from the village might be paddling out into the churning bay on “rafts” made of two thick bamboo poles, their piles of fishing nets balancing precariously as they navigate the choppy waves. Beyond the sweeping slab of rock that breaks this turbulent current, scores of multicoloured outrigger fishing boats rest on the grey sand, under a fringe of palms. Although each of these boats is manned by only one or two fishermen, it will take a team of at least four to hoist the boats across the beach and into the water. Some of the fish that these men catch will be sold to the family who live just up the hill. They in turn are well known in this area for making the most delicious chilli and lemongrass fish satay. Now, the island’s late rainy season has dwindled and the winds have begun to arrive. This is always a time of delight for the children here, who fly their homemade kites on the beach. Their fathers, who are now out of work, are honing the flying skills of the younger children, who seem far more proficient than is usual for this early in the season. As borders slowly begin to reopen around the world, I am beginning to feel a gentle resistance towards ever leaving this quiet part of Bali. With much of the planet in turmoil, it has been a privilege to settle into the gentle rhythm of life here. In Pekutatan, mornings unravel to the songs of wild birds, days are punctuated by tides and, in the evenings, traditional gamelan music filters through the wild tendrils of bougainvillea.