By James Ducker northern football correspondent at the Etihad Stadium 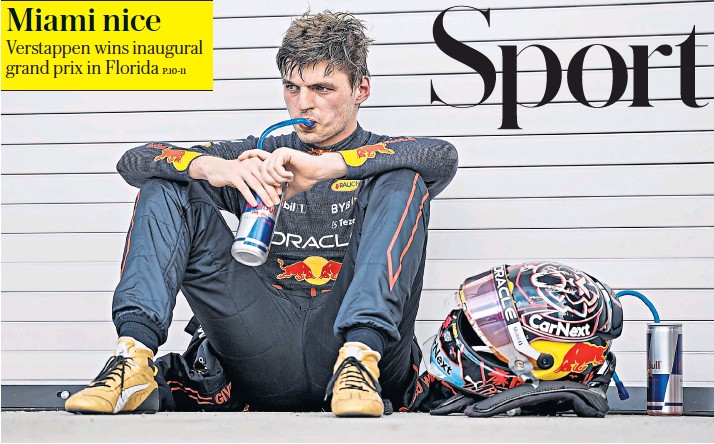 Pep Guardiola has stoked the fires in the title race by claiming the whole country wants Liverpool to beat Manchester City to the Premier League crown. City responded to Wednesday’s crushing Champions League semifinal collapse against Real Madrid by thrashing Newcastle 5-0 yesterday to move three points clear of Liverpool at the top of the table and overtake their rivals on goal difference. Victory came at a cost, though, with Ruben Dias suffering a hamstring injury that means City will be without the Portugal centre-half plus fellow defenders Kyle Walker and John Stones for their final three games of the campaign. But Guardiola sought to create a siege mentality among his players by suggesting City will prove unpopular winners if they pip Liverpool – who were held to a 1-1 draw by Tottenham Hotspur on Saturday – to the post to claim a fourth title in five seasons. “Everyone in this country supports Liverpool, the media and everyone,” the City manager said in the first sign of mind games in this title race. “Of course because Liverpool has an incredible history behind [them] in European competition – not in Premier Leagues, because they’ve won one in 30 years – but it’s not a problem at all. “Liverpool, alongside [Manchester] United, it’s the most famous team, with what they have done in history – in terms of titles, legacy, history, dramas, for many, many things. But we are, for the last 10, 11, 12 years, coming there. I know we are sometimes uncomfortable, but I don’t care. “The people want Liverpool to win more than us – it’s not an issue. It’s normal. Maybe they have more supporters all around the world and in England maybe more support Liverpool than us.” City will have only three senior defenders available to face Wolverhampton Wanderers at Molineux on Wednesday, with Dias, Walker (ankle) and Stones (hamstring) out for the rest of the season and expected to miss next month’s internationals, and Nathan Ake likely to be absent with an ankle issue. “Ruben, Kyle and John are out until the end of the season. Next pre-season maybe they will be ready,” Guardiola said. “Ake had a problem in the ankle for a long time.” Asked if Ake would be available for Wolves, Guardiola said: “I don’t think so. Maybe Nathan not for Wolves but maybe for the last two [against West Ham and Aston Villa] he can be [available]. Right now we have three defenders – Joao [Cancelo], Oleks [Zinchenko] and Ayme [Aymeric Laporte] plus [midfielder] Fernandinho. “If Rodri has to play in that position he will play. Everyone has to do extra. We have 13½ players available for these games, no more than that, plus the academy.” City now have a better goal difference than Liverpool by four, having been eight worse off only four games ago, and Guardiola believes it could yet prove a significant factor come the final reckoning. City famously won the title on goal difference from United in 2012. “We need to do nine points or maybe six right now, it depends what happens the next two games in terms of goal difference, but now Wednesday is the real final for us,” he said. “Destiny is in our hands, if we win our games we will be there.” Newcastle manager Eddie Howe admitted there was a chasm between City and Liverpool and the rest of the Premier League. “It’s a huge gap between us and Liverpool and City,” he said. “We have to try to close that gap.”