How Liverpool fell victim to Tottenham’s smash and grab 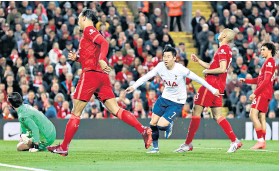 So farewell then, to the concept of being “Spursy”? It was fun for the rest of the league while it lasted. At Anfield, just as at the Etihad Stadium in February, Antonio Conte’s side were the opposite of everything the club once were at the toughest venues; they were organised, compact, resolute, courageous and streetwise. Cristian Romero was the chief choreographer of the rearguard action, Ben Davies played as if he would have flung himself in front of a cannonball, and Eric Dier continued his healthy trend of ensuring that his surname is no longer an aptronym. Gareth Southgate’s case file should be updated. Dier’s England exile has gone from understandable to illogical to soon to be over. Conte’s side made more defensive blocks than any Premier League side this season (13) other than Leeds United (14) – also against Liverpool. Davies and Dier led the way, but they were closely followed by Son Heung-min – testimony to the responsibility bestowed on every Tottenham player to engage in what became a beautiful occupation of their own penalty area. Davies hurling himself twofooted to divert Mohamed Salah’s 73rd-minute shot typified the fortitude. Spurs even managed to get in the way of Luis Diaz’s equaliser and Pierre-Emile Hojbjerg was unlucky to deflect the shot past his keeper. Conte’s side completed 51 defensive clearances, and made 20 tackles. Back on board the all-out counter-attacking bus Spurs had 35.1 per cent possession, completed 338 passes and managed eight shots, primarily via counterattacks. Their wing-backs, Ryan Sessegnon and Emerson Royal, formed a five-man defence, while their midfielders retreated to treble up on the dangerous Liverpool wide attackers. Diaz was still unstoppable, but overlapping full-backs Trent Alexander-Arnold and Andrew Robertson endured one of their least productive nights. Liverpool face this strategy from 80 per cent of opponents but rarely so effectively. The small matter of Harry Kane and Son being so good induces fear in opponents the longer the game is in the balance. Spurs counter-attacked with pace and purpose, ready and able to pounce on errors, as they did after 56 minutes following a loose header by Ibrahima Konate, a series of precision passes leading to Son’s goal. They were close to an injury-time winner, and such was their danger, Jurgen Klopp had to substitute his anchor, Fabinho, because one more tactical foul would have led to a second booking. He used Naby Keita as the third substitute when the search for a late winner is usually “Origi time”. He remained on the bench and Liverpool ran out of ideas. To get under the skin of Klopp, become Diego Simeone There is only one football style Klopp despises more than Atletico Madrid’s – that of teams who impersonate Atletico. So when he was invited to praise Spurs’ defensive approach – emotions high after a draw which was presumed to have cost his team the title – anyone expecting a Damascus-style conversion misread the room. “I’m the wrong person for that [question], I don’t like this kind of football but that’s my problem,” Klopp said. “I think they are world-class and think they should do more for the game. Yes, world-class players block all the balls. Atletico Madrid is doing it.” Only the most hypocritical supporters will back Klopp’s “this is anti-football” stance, given they still laud the Rafael Benitez years. Conte’s blueprint against technically superior sides is no different. And there were no complaints from the Kop when Spurs took six points from Manchester City this season. It is for Spurs fans to decide what they want from their team longer term. One suspects Tottenham supporters quite like the idea of going to Anfield without the white-flag waving, which became their trademark there for most of the past 50 years. If Conte delivers Champions League qualification, the identity change – and resentment of opponents unaccustomed to such resistance – will be justifiably lauded.