Who is to blame for United humiliation? 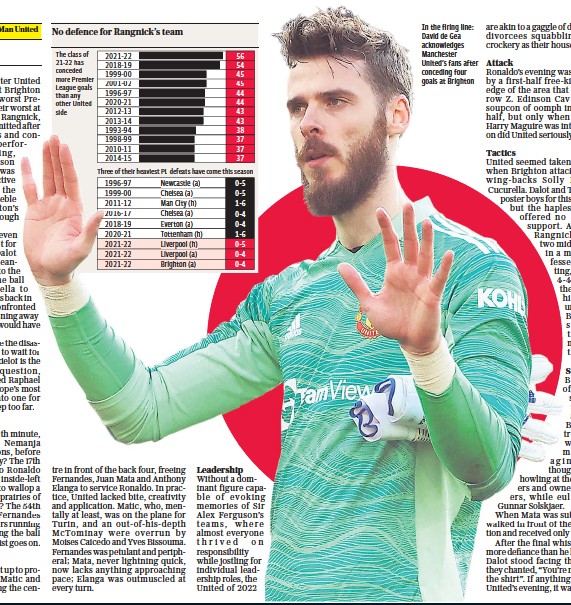 Defence The four goals Manchester United conceded in an hour at Brighton took them to 56, their worst Premier League total and their worst at all since 1978-79. As Ralf Rangnick, the interim manager, admitted after apologising to the fans and condemning Saturday’s performance as “humiliating, unacceptable”, this season has been a “disaster”. It was an individual and collective defensive failure from the moment Alex Telles’s feeble header enabled Brighton’s opener, which went through Victor Lindelof ’s legs. The second goal was even more blood-curdling. Not for the first time, Diogo Dalot failed to track back as Leandro Trossard sauntered to the byline. When he cut the ball back for Marc Cucurella to shoot, Lindelof turned his back in the manner of a child confronted by the school bully. If running away was an option, he surely would have taken it. If Dalot and Telles were the disasters that nobody needed to wait for them to happen and Lindelof is the answer to nobody’s question, United have transformed Raphael Varane from one of Europe’s most elegant centre-backs into one for whom the basics are a step too far. Distribution Where to start? The eighth minute, when Juventus-bound Nemanja Matic sized up his options, before rolling the ball out of play? The 17th minute, when Cristiano Ronaldo ran into space down the inside-left channel, only for Dalot to wallop a pass into the untended prairies of the inside-right channel? The 54th minute, when Bruno Fernandes spotted two United players running into space, before playing the ball behind them both? The list goes on. Midfield In theory, United were set up to protect and expand, with Matic and Scott McTominay holding the cenare tre in front of the back four, freeing Fernandes, Juan Mata and Anthony Elanga to service Ronaldo. In practice, United lacked bite, creativity and application. Matic, who, mentally at least, was on the plane for Turin, and an out-of-his-depth McTominay were overrun by Moises Caicedo and Yves Bissouma. Fernandes was petulant and peripheral; Mata, never lightning quick, now lacks anything approaching pace; Elanga was outmuscled at every turn. Leadership Without a dominant figure capable of evoking memories of Sir Alex Ferguson’s teams, where almost everyone thrived on responsibility while jostling for individual leadership roles, the United of 2022 akin to a gaggle of dysfunctional divorcees squabbling over the crockery as their house burns. Attack Ronaldo’s evening was summed up by a first-half free-kick from the edge of the area that ended up in row Z. Edinson Cavani added a soupcon of oomph in the second half, but only when centre-half Harry Maguire was introduced late on did United seriously threaten. Tactics United seemed taken by surprise when Brighton attacked through wing-backs Solly March and Cucurella. Dalot and Telles may be poster boys for this feeble team, but the hapless pair were offered no meaningful support. At half-time, Rangnick withdrew two midfielders and, in a move he confessed to regretting, switched to 4-4-2, leaving the major issue his team faced unchallenged. Brighton duly scored three times in the 15 minutes after the restart. Supporters Before kickoff, with the starting XI unchanged after beating Brentford, the travelling fans were at their most encouraging. Soon, though, they were howling at their own players and owners, the Glazers, while eulogising Ole Gunnar Solskjaer. When Mata was substituted, he walked in front of the United section and received only applause. After the final whistle, showing more defiance than he had before it, Dalot stood facing the hordes as they chanted, “You’re not fit to wear the shirt”. If anything summed up United’s evening, it was this.