Boehly’s first big problem: What to do with Lukaku

By Gerry Cox at Stamford Bridge 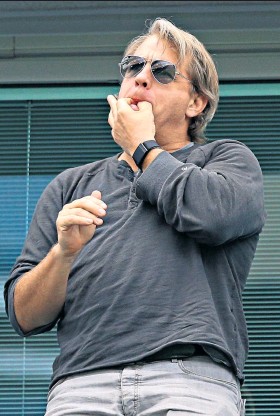 Romelu Lukaku chose the perfect time to score his first league goals of 2022, with Todd Boehly watching on after agreeing terms to buy Chelsea. Boehly’s consortium became the preferred bidder last week, and in the early hours of Saturday it was announced that the club had agreed a £4.25 billion deal, subject to approval from the Government and Premier League. Boehly watched on from the executive seats of Stamford Bridge’s East Stand, and one of the billionaire’s first tasks on taking over will be to assess Chelsea’s ability to challenge the likes of Manchester City and Liverpool. Lukaku was supposed to give the European champions an extra edge when he was signed for £97.5million from Inter Milan last summer. But the Belgian had scored only five league goals before the weekend, and in recent months has been limited to playing in fits and starts. Saturday was a rare start and after a typically troubled first half, he found renewed form and confidence to score twice and set Chelsea on their way to what should have been an invaluable win. When Lukaku left the pitch to be replaced by Kai Havertz in the 89th minute, it was to applause from Chelsea supporters who were waiting nervously for the full-time whistle after Wolves substitute Francisco Trincao had given his side hope with a fine solo goal. More poor defending allowed Wolves to snatch a draw in the sixth minute of stoppage time, when Conor Coady powered a header past Edouard Mendy. After a long lament about his side failing to stick to his plan and taking too many risks, Thomas Tuchel was asked if Lukaku’s return to goalscoring form struck a brighter note. “A good performance, but it’s not the time to talk about individuals and praise individual players. We lost crucial points as a team.” Later, the Chelsea manager conceded that confidence was a crucial factor. “Strikers are very sensitive because they are decisive and that is why it [confidence] is super important. I don’t know of any other strikers who have confidence when they are on a streak that they don’t wish for. It’s the same with Romelu.” The turning point was a 56thminute penalty, when Lukaku was tripped by Romain Saiss. The Belgian converted the spot-kick, and his revived confidence showed two minutes later as he ran on to Christian Pulisic’s pass, took one touch and then fired the ball past Jose Sa. “Immediately you could see the second goal was easier because he had his [opening] goal, which he fought hard for,” Tuchel said. Lukaku’s all-action display was a big improvement on his torrid time at Crystal Palace in February, when he recorded just seven touches, including kicking off, a record low for anyone playing a full 90 minutes since such data was first kept in 2003-04. On Saturday he had more touches (10) in the opposition box than any other player, completed 11 out of 13 attempted passes, got most shots on goal (four) and most on target (three). There is still a way to go, but at least he is giving the prospective owners hope that they may not have to take a financial hit and sell him at a huge loss, Tuchel said on Friday that Lukaku still had a big part to play for Chelsea, not just this season but next season, too. “I want him to be an important part of the squad, he is right now and will be a very important part of the squad next season.” Let us see if Boehly agrees.