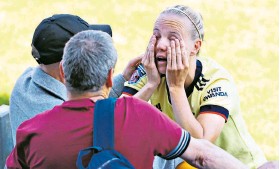 Former England defender Paul Konchesky said he was honoured and excited to be appointed West Ham manager on a two-year deal following Olli Harder’s departure yesterday. Harder has moved on after taking charge of his final match, the 2-0 defeat by Arsenal, who missed out on the Women’s Super League after being pipped by Chelsea. Konchesky, who made 70 appearances for West Ham between 2005 and 2007 before spells at Fulham, Liverpool and Leicester, has been working as Harder’s assistant since May 2021. “This is a very proud moment for me. I’m honoured,” Konchesky said. “I’m relishing both the challenge and the opportunity. West Ham is close to my heart – it was a dream to play for the club, and now to be in this position is something I am really excited about.” Before Konchesky’s appointment was announced, the focus had been on Arsenal’s agonising near miss for the title and the future of star player Vivianne Miedema. Arsenal manager Jonas Eidevall said the club would do everything they could to keep the Dutch forward. Miedema, who has been Arsenal’s top scorer for the past four seasons, is out of contract this summer and reports have linked the Dutch forward with a move to European champions Barcelona. She insisted yesterday that she was “undecided” on her future. “I really want to win titles,” Miedema said. “This year I haven’t won anything. If I feel like the club is moving in that direction, then maybe I stay another year or two years. I will have a holiday and will then make a decision.” When she was substituted in the 90th minute to a standing ovation, Miedema solemnly applauded the supporters, potentially for the final time in her five-year Arsenal career. But not even a player-of-the match performance could change Arsenal’s fortunes, as Chelsea’s comeback to beat Manchester United made sure it was in vain. Arsenal had pushed the title race as far as they could, winning the past eight games, and losing only one all season, but ended up trophyless. “We need to be disappointed, we gave absolutely everything,” Eidevall said. “We won 55 points, if we had drawn against Birmingham [in January] we would have won the trophy. That’s how small the margins are. The players were a Birmingham game away from being “invincibles”, and you would have called them the greatest Arsenal team ever.” On how key Miedema was to his plans, Eidevall said: “We’ll do our best to try and make her stay. She was stellar today. She was one of the players that, when things got tough, she showed that self-confidence in going, ‘Give me the ball, I can play our way out of this’.” Beth Mead, whose 11 league goals were second only to Miedema’s 14 this season, said it was “super important” her team-mate stayed in north London, adding: “It’s Viv’s decision, but I’m quietly confident.” Yesterday was Arsenal’s final chance of silverware, and they came agonisingly close. When news had filtered through that Chelsea were trailing United in the first half, the title poised in Arsenal’s hands, the noise from the travelling fans increased. Stina Blackstenius was brought on at the hour mark and was instantly played through by Miedema. She duly thumped Arsenal ahead with her first touch. Steph Catley’s powerful strike from inside the box quickly doubled Arsenal’s lead, but almost simultaneously news arrived that Sam Kerr had put Chelsea two ahead, and the energy was sucked out of the match. “There needs to be consistency across the season,” said Mead, who could not hold back her tears postmatch. “Our Christmas and afterChristmas patch killed us.” As well as the 2-0 loss to Birmingham in January, Arsenal dropped points against Manchester City, United and Chelsea, allowing Chelsea to overtake them. Eidevall added that he planned to get the Arsenal boys’ academy involved in training and internal games, to improve his team’s ability to cope with man-marking teams and “play against something more physical and faster than we will ever play against in the Champions League”. (3-5-2) Arnold; Fisk, Cissoko (Garrad 85), Flaherty; Wyne (Svitkova 65), Hasegawa, Yallop, Brynjarsdottir (Houssein 85), Longhurst (Joel 84); Leon, Walker (Filis 82). Moore (g), Stringer, Cairns. Brynjarsdottir. (4-2-3-1) Zinsberger; Maritz, Williamson, Wubben-Moy, Catley; Walti, Little; Mead (Parris 82), Foord (Blackstenius 59), McCabe; Miedema (Maanum 90). Williams (g), Cull (g), Beattie, Sorensen, Iwabuchi, Wienroither. Maritz. Emily Heaslip (Bury St Edmunds).