By Tom Garry at Kingsmeadow 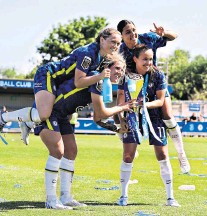 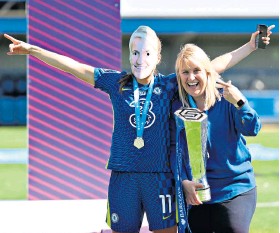 Cuthbert 18, Kerr 46, 66, Reiten 51 Thomas 13, Toone 25 Att: 4,378 women’s football reporter Emma Hayes hailed her side’s title triumph after a half-time tactical masterstroke, a blistering secondhalf comeback and two stunning goals from Sam Kerr powered Chelsea to a third consecutive Women’s Super League crown. On a gripping final day of the season when the lead at the summit repeatedly changed hands, Chelsea’s ninth straight WSL victory, after trailing 2-1 at half-time, was enough to pip Arsenal by a point. “We’re champions because of our second half of the season,” a relieved and “exhausted” Hayes said. “We know how to get over the line. This is by far and away the best one [title]. The fact we were 2-1 down and won 4-2, that epitomises the second half of the season showing from us. “Arsenal have had an amazing season but I knew, on that opening day [when Arsenal beat Chelsea 3-2], ‘OK, be happy with your win, but this is not where you win leagues’. I know you win it at the back stretch. We’re title-winners because we won enough games, but we’ve done it from a difficult place. “In January we were down to 13, 14 players through eight games. That was where the title was won, that stretch. I’ve never known injuries like this year, we had bare bones at some point. Everybody stepped up, no one was a passenger.” Chelsea will look to complete the double in Sunday’s FA Cup final against Manchester City. “I’m absolutely mentally drained right now,” said Hayes. “I will just go home, have a cup of tea as usual and get ready for tomorrow.” In defending their title, Chelsea became the first club to win the WSL three years in a row, with Arsenal (2011 and 2012) and Liverpool (2013 and 2014) having won it twice in succession before Hayes’s first trophy in 2015. However, at half-time, a different story was unfolding. Trailing 2-1 to Manchester United and looking set to let the title slip from their grasp, Chelsea roared back with three excellent goals in the first 21 minutes of a sensational second-half performance, including two breathtaking volleys from the football writers’ player of the year, Kerr. The Australia striker lashed in leftfooted from the edge of the box to make it 2-2 and then, after Guro Reiten had completed a superb team move to edge Chelsea in front, Kerr produced more magic. She controlled a high ball with her chest and looped a volley past Mary Earps. It was a dramatic turnaround that dashed second-placed Arsenal’s dreams of a first title since 2019, and ended United’s faint hopes of qualifying for the Women’s Champions League. As it turned out, thirdplaced Manchester City’s victory at Reading meant that Manchester United would have finished fourth regardless. Marc Skinner’s visitors began brightly and the cat was among the pigeons when Katie Zelem’s cross from a free-kick was headed in by Martha Thomas. Scotland midfielder Erin Cuthbert drilled a forceful finish into the bottom corner to make it 1-1 but United remained the stronger side and they were quickly back in front when Ella Toone met Leah Galton’s deep cross on the volley and her strike deflected in off Jonna Andersson’s leg. Then came the moment when Hayes’s tinkering changed the title race. South Korea midfielder Ji So-yun, in her final home game for Chelsea after eight years at the club, and England striker Bethany England were both brought on at halftime and the double change proved to be a masterstroke. Both players immediately made an impact, as the champions scored twice in the first six minutes after the restart. “I nearly made subs after 30 minutes,” Hayes admitted. “But I don’t panic, it’s not in my nature. We got to half-time and I made the decision. I changed the shape so that we went one v one everywhere.” Kerr moved on to 20 WSL goals for the season and the golden boot winner said: “I’m not known for my ‘worldie’ goals but the thing that I’m known for is getting it done when it matters. The most important thing for me is making sure the team is at the top of the table when the season ends.” Hayes, for whom this was a record-extending sixth WSL title including 2017’s shortened Spring Series, described Kerr’s second goal as “outrageous”, adding: “That was world class, audacious. She’s the best for a reason.” Chelsea (3-4-3) Berger; Carter, Bright, Eriksson; Charles (Nouwen 59), Cuthbert, Ingle (England h-t), Andersson (Ji h-t); Harder (Fleming 77), Kerr (Spence 90+3), Reiten. Subs Musovic (g), Mjelde, James, Abdullina. Booked Fleming. Manchester United (4-2-3-1) Earps; Batlle, Ladd, Thorisdottir, Blundell; Zelem, Groenen (Bruun 81); Toone, Thomas (Boe Risa 76), Galton (Hanson 65); Russo. Subs Baggaley (g), Harris, Moore, Fuso, Caldwell, Smith. Booked Ladd. Referee Abigail Byrne (Suffolk).