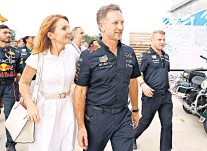 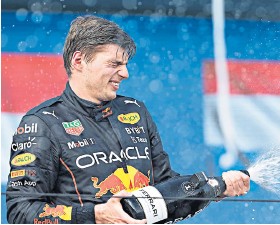 Thoughts and prayers were with Martin Brundle last night, after he endured a hellish start to the Miami Grand Prix. In a bewildering, feverish segment in the Florida heat and noise, both viewer and presenter alike found themselves wondering: is this the traditional pre-race grid-walk segment that the King’s Lynn-born former racer has made his own on Sky’s F1 coverage? Or has a portal opened to the multiverse, a sweaty purgatory where nobody knows anybody else, a living anxiety nightmare? Brundle’s shirt, in fairness, did suggest the last, a sort of cubist assault on the senses that perfectly mirrored the situation. Brundle and shirt gamely walked up to the Williams sisters, greeting them under the misapprehension that they might know who he was or what he wanted. Venus looked at him in withering fashion for a bit. Martin pottered off. Pharrell Williams, the singer, also seemed nonplussed. DJ Khaled, the DJ, was more willing to play ball, launching into an impassioned homily about Miami. “Beautifully summed up, sir,” said Brundle, presumably wondering if he could fire his agent by text. Perhaps the stickiest moment was when Brundle strode up to a very large American sportsman and – sure, why not? – figured he must be NFL star and recent SuperBowl MVP Patrick Mahomes, and interrogated him thusly. It was, in fact, somebody called Paolo Banchero, a basketballer. Big Paolo, you have to say, took it in his 13-foot stride. A tough assignment for Brundle. There seemed to be so few familiar faces. Oh how he must have wished that he was back at Silverstone, where you are looking at a more family saloon sort of a ride: your Rory McIlroys, your Ginger Spices, David Beckham at the absolute outer limits. Not so Miami. Divided by a common language, they say. A nerve-shredding ride. Driving a car at 200mph must be a cakewalk by comparison.