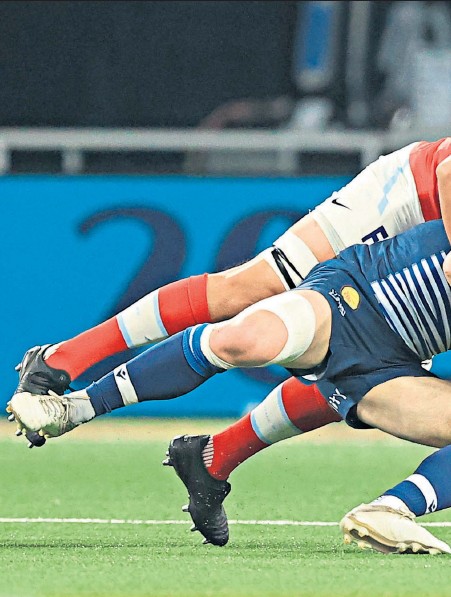 Sale once again fell at the quarterfinal stage of this competition but there was no shame in missing out on a place in the semi-finals to a couple of sublime bits of skill from Teddy Thomas and Finn Russell, as Racing 92 booked a date with La Rochelle in the final four next Sunday. As a result the curtain was brought down on English participation in the Champions Cup, with Leinster joining the French trio of La Rochelle, Racing 92 and Toulouse in the semi-finals – and that is before the Gallagher Premiership salary cap is reduced next season by more than £1million . For Alex Sanderson, the Sale director of rugby, the answer lies with performance and ability rather than budgets. “We need to get better. I believe we can and we will get better. The salary cap doesn’t come into effect until next year so we can’t use that as a mitigating factor,” Sanderson said. “We’ve got a taste for it now. The boys like the taste. I’m pretty certain it won’t be the last time we’re into these kinds of occasions. You have to experience it, lose and come back that little bit stronger.” One positive for Sale at least was that England flanker Tom Curry emerged unscathed, despite a bruising 54 minutes. The combination of Thomas almost miraculously avoiding the touchline collecting a Russell crossfield kick before grubbering ahead to score, and Russell receiving a gift from above after his hack upfield bounced perfectly into his path, inviting him to produce his first try of the season, ultimately swung the contest Racing’s way. Their superstars shone as you would expect but the impacts of 19-year-old scrum-half Nolann Le Garrec and 21-year-old full-back Max Spring were also vital for Racing, offering a positive glimpse of the club’s future. Sale were dogged and physical and led at half-time after Manu Tuilagi, showing good awareness when Racing’s defence seemed to stop after a dropped pass, cantered over to create a 10-6 lead. But it did not last long as Racing pulled clear and Sale – outside of their shortrange carrying and maul, plus a dominant scrum – lacked the wide threat to keep the hosts on their toes. “You don’t win quarter-finals by conceding 40 points but look at the positives, it wasn’t for a lack of effort or our set-piece or physicality,” Sanderson said. “For the most part it was right up there. Some of our decisions gifted them loose ball in space for some of their rock stars and that played into their hands.” A first half interrupted more by scrum resets than moments of excitement was lifted right at the death by Tuilagi’s try – scooping the ball up after a loose pass, spotting the gap on the angle and bursting through to score under the posts, with Robert du Preez’s conversion giving Sale a deserved lead. However a moment of sheer brilliance from Thomas had Racing back in front immediately after the break. Russell’s low grubber across the field was speeding towards the touchline when Thomas did wonderfully to catch it, somehow keeping his feet infield, before kicking ahead and dotting down to score. The gap between his foot and the touchline was millimetres but the France wing was certainly in, with a frankly stunning bit of play. They will miss Thomas here next season when he heads to La Rochelle. With Le Garrec’s third penalty soon following to extend Racing’s lead to six points, after Akker van der Merwe was penalised for a trip on Thomas, Racing were back in control after that brief wobble. Then after Russell benefited from perhaps the most fortunate bounce of a ball you have seen – hoofing an