Olesen hits back with Belfry win 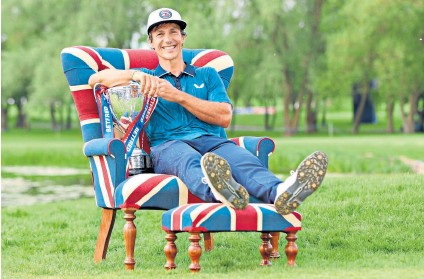 The Centurion Club will no doubt have the riches when it stages its $25million (£20.2million) Saudi event next month, but will it begin to boast the drama that the Belfry witnessed yesterday? Five months after being cleared in a London courtroom of sexual assault, Thorbjorn Olesen holed 30-footers on the final two holes to win the Betfred British Masters by a shot and collect £300,000 for his seventh Tour win. And, although that is roughly 10 times less than the winner of the LIV Golf opener, 90 miles south in Hertfordshire, will pick up, there can be no doubt that the Dane’s 3-3 finish was priceless. For the second day running, the former Ryder Cup player eagled the 17th hole and birdied the 18th, to squeeze out Swede Sebastian Soderberg. The Ryder Cup venue has staged many classic finales before, but what a final hour the grandstand on that famous closing hole enjoyed. First Richie Ramsay went to the 18th with a one-shot lead over Soderberg, who was in the clubhouse on nine under after a 68. But the Scot hit his second into the water and the resulting doublebogey meant the former US Amateur champion signed for a 71 and slipped into a tie for third with countryman Connor Syme and South African Justin Walters. Meanwhile, Olesen, the overnight leader, looked to have wasted his chance of a first title in almost four years, with bogeys on the 14th and 15th. Then when his bunker shot lipped out of the hole on the 16th, extra holes were surely the most for which he could have hoped. But Olesen, the world No376, crushed poor Soderberg with those incredible putts. This was an emotional victory for the 32-year-old. In 2018, Olesen played in his first Ryder Cup and was an established member of the world’s top 50. But the following year he was charged with sexually assaulting a woman on a flight to England after playing in a World Golf Championship in Memphis. Olesen claimed he turned into an “automaton” and was not in control of his body after drinking and taking prescription-only sleeping pills. The Dane, who lives in London, was acquitted by a jury in December. “It’s been a long time since I won and it’s been some tough years, but luckily I had some great people around me, especially my partner Lauren [Zafer],” Olesen said. “It’s been extremely hard, really tough, and that’s why this one feels really special. “You sometimes feel that you’re never going to win again, even play again, and I think that was really tough to go through. Standing here after a lot of hard work and belief to win again really means so much. It gives me loads of confidence, which in this game is so important, especially with the finish I had. “It was obviously a pretty tough day and I hit a lot of shots to the left. I was really struggling. I somehow just kept going, and yeah, what a finish. Incredible.” Ramsay said of his costly doublebogey on the 18th: “It’s probably the biggest kick in the teeth you are going to get in my career. “It was just a horrible yardage and I didn’t fully commit as I was aiming to ride it on the wind and I just duffed it. I executed so many shots under pressure. It was just that last one – probably thought too much about it. “I did everything right bar one shot and it was the one shot that killed me.”