Racing can help the monarchy to have bright future 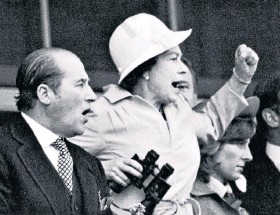 After more than three decades of being involved with horses, the news that a particularly fancied horse is going to miss a big race is normally water off a duck’s back to me. That’s horses, right? But last week’s report that the Queen’s Reach for the Moon, a real live chance for the Derby, would not be ready for Epsom left a cloud over me for some days. My sadness was not because the race, and ergo the public’s enjoyment, would be diminished. They will both get over it. My lugubriousness was entirely down to the disappointment I felt for the Queen. I was so keen to see the defeats of Aureole, second to Pinza in 1953, and Carlton House, who was third behind Pour Moi in 2011, avenged, because I appreciate what an extraordinarily sporting owner the Queen is. Enthusiasm and a love of horses alone do not demand such respect. But I am told on good authority that she is a wonderful person to train horses for; dignified in victory, magnanimous in defeat. It will, of course, be nice if Reach for the Moon makes it to Royal Ascot, but I suspect the majority of racegoers care more that the monarch herself will be there. It was announced last week that she would not be attending her garden parties this season; and who can blame her, why not let Sophie Wessex greet all those gardeners, plastered with hand sanitiser? But that brought into sharp focus the fact that one day the Queen will put her feet up in front of the telly and watch Royal Ascot from home. For those of a certain age, the thought of the Royal meeting without the Queen will be a minor crisis. But it is also a fantastic opportunity for horse racing to be the conduit between the nation and the future of the monarchy. Even though Prince Charles was never considered to be the horsey one in his family; his sister, after all, was a gold medallist on top of a horse; he and Camilla will be able to seamlessly step into the shoes of Queen’s equine empire. That is just as important for the aspirational glamour of racing as it is for a Royal family who need to stay relevant. Camilla’s life has been steeped in horses, which conveys on her a genuine authenticity. And let’s face it, there is nothing more nauseous than watching an owner who clearly does not know a mane from a tail leading a horse into the winners’ enclosure. In a quiet way she has already bred a few, and one can presumably assume that the reason she has not done so on a bigger scale is because racing has always “been the Queen’s thing”. And let us not forget that Prince Charles cut a dash across some scary country out hunting until the pre-woke brigade snuffled that fun out. At the belated age of 31, he was brave enough to ride in a few steeplechases. Unfortunately Allibar, a safe and suitable conveyance on whom he finished second at Ludlow, died of natural causes and was replaced by the erroneously named Good Prospect, who dumped him twice in five days, much to the joy of the paparazzi. To put things into perspective, if Sam Waley-Cohen’s riding career had depended on riding horses such as Good Prospect, his fame would now be confined to the world of dentistry. Had the Queen Mother stepped up to the mark and given him a few of her decent nags to ride, Prince Charles’s equine credentials may now have looked very different. Was there perhaps a perception within the Royal households that the future king should not be seen to have a string of racehorses at his beck and call? His father, after all, was never an admirer of the sport. I once posed that suggestion to Sir Martin Gilliat, the Queen Mother’s private secretary, over tea at Clarence House. However, Sir Martin, a survivor of Colditz, was far too adroit to get drawn in by such a question and deflected it by changing the conversation. “Darling, I’m sorry about the cut on my head… the ceiling fell on me while I was on the loo before church… another sandwich?”