Did an 18th-century settlement of philosophical pirates lay the groundwork for the Enlightenment? 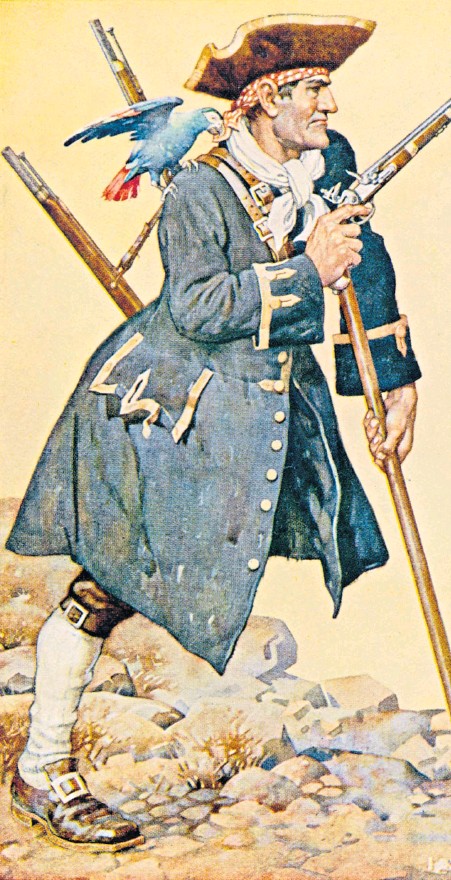 Poem Of The Week

208pp, Allen Lane, T £16.99 (0844 871 1514), RRP £18.99, ebook £9.99 ÌÌÌÌÌ The Malagasy coast in the early 18th century was teeming with pirate settlements. Tales of the pirates reached Europe in such (not wholly reliable) books as the 1724 volume A General History of the Pyrates. Its author, supposedly a “Captain Johnson” – possibly a pen-name used by Daniel Defoe – wrote of a faraway utopia in Madagascar. “Libertalia”, he said, was a democratic nation that had abolished both slavery and private property. The pseudonymous Captain Johnson left his mark on European literature through his influence on the creators of two of the bestknown fictional pirates: Robert Louis Stevenson’s Long John Silver and JM Barrie’s Captain Hook. This final, posthumous book from the American anthropologist David Graeber proposes that these pirate settlements were also, “in a sense, the first Enlightenment political experiment”; the dashing corsair a symbol of freedom, “as much a figure of the Enlightenment as Voltaire or Adam Smith”. It’s a bold claim, but this isn’t the first time that the left-wing theorist and activist (who died in 2020 aged 59) has taken a radically revisionist approach to history. A self-identified anarchist, albeit of the peaceful kind, Graeber was a kind of younger Noam Chomsky for a new generation of brassed-off youth. During the 2011 Occupy Wall Street movement, New York’s streets were full of protestors carrying copies of his most popular book, Debt: The First 5,000 Years. One of his remarks inspired their slogan: “We are the 99%.” Graeber had outlined the history of debt in relation to other important phenomena: obligation, freedom, punishment and the state. His account also came with injunctions to hope: understanding how our systems of social control had arisen might give us a vision of life without them; perhaps even help us to dismantle them. That quest now appears in a rather different form in this short work – really a longish essay. Like other historians, Graeber takes most of Captain Johnson’s breathless piratical tales with a pinch of salt. But he thinks they contain an element of truth in so far as we have reason to suppose that these settlements hosted a series of “self-conscious experiments in radical democracy”. Brutal they certainly were, but so were the official armies (and navies) of the day. What was unprecedented about these settlements, he claims, was their willingness to experiment with egalitarian and democratic forms of social life. Graeber is conscious of the temptation to romance. The fact that Europeans couldn’t get enough of pirate fantasies may tell us more about Europe than it does about Madagascar. As long as our lives are governed by “subtle and insidious” systems of discipline and control, he writes, “we will always fantasize about buccaneers”. A good book could be written exploring only this thesis. But Graeber thinks enough has been made of Europeans and their fantasies of noble savages. He hopes, rather, to have written a work that establishes “what actually happened on the northeast coast of Madagascar” in those years, one that gives the Malagasy people equal billing in the story. Despite its packaging, Pirate Enlightenment is not really the work of popular history or theory that its publishers promise. The historical narrative is extremely dense, and even with the helpful chronology of events set out in the appendix, the reader will need a large chart to keep track of everything going on. (A list of dramatis personae, a map and some illustrations would have made a huge difference.) There are indeed suggestive ideas here, and some colourful per sonalities. Take the figure of “Molatto Tom”, described in the chronicle of Clement Downing, an 18th-century naval officer, as “a Man of tall Stature... [with] long black Hair like the Malabar or Bengal Indians”, perhaps the son of the legendary pirate Captain Avery with an Indian woman kidnapped from the ship of the “Grand Mogul”. Or that of “John Plantain”, described by Downing as born in Jamaica “of English Parents” who taught him all they knew: “to curse, swear, and blaspheme, from the time of his first learning to speak.” Plantain set himself up as “the king of Ranter Bay”, just possibly an allusion to the English “Ranter” movement that had sought to abolish private property. There was another book that could have been made out of these materials, something closer to historical fiction that actually tried to be what Graeber promisingly describes as “a story about magic, lies, sea battles, purloined princesses, slave revolts, manhunts, make-believe kingdoms and fraudulent ambassadors”. But Graeber the historian ends up hedging nearly every factual claim of any interest with riders: “an admittedly rather fanciful passage”; “must have taken place”; “sources are meager”. He ends his book with a series of powerful rhetorical questions about the intellectual influence of the pirates: perhaps they were the real source of the ideas (liberty, equality, fraternity, democracy) made famous by the French Revolution. Was it, for instance, purely fantasy when Johnson wrote of the Malagasy pirates as setting an example of “an amicable Way of Life” for Europeans, settling disagreements through conversation rather than violence? But he must answer his questions with a melancholy, sheepish “We can only guess”, calling on future historians to find out more. One hopes they do. This unsatisfying book – too speculative to be a monograph, too scholarly to be a romance, and too messy to serve as a manifesto – leaves one thinking, “Important, if true.”