Get the inside track on racecourse life

Based on interviews with a female horse-trainer, this riveting novel grants entry to a hidden world

By Amber MEDLAND KICK THE LATCH by Kathryn Scanlan 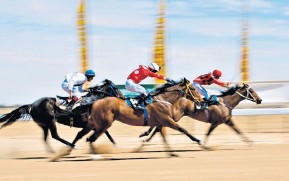 96pp, Daunt Books, T £9.99 (0844 871 1514), RRP £9.99, ebook £7.12 ÌÌÌÌÌ Kathryn Scanlan makes the mundane details of everyday life hum with electricity. Her debut Aug 9-Fog (2019) ventriloquised one year of an 86-year-old woman’s life by collaging her diary, which Scanlan found at an estate auction in Illinois. In The Dominant Animal, a short-story collection published the following year, she took further liberties with time, whittling down 40 stories to fit into 140 pages. Kick the Latch, her latest book, also toys with categories of literary genre. Based on transcribed interviews with Sonia, a Midwestern horse-trainer, the book follows the arc of her life. Scanlan calls it a “work of fiction”. It could just as easily be a kinetic portrait or an oral history of the racetrack. Her sentences swerve when you least expect it: “Galloping, a horse spends a lot of time suspended in the air – flying, really – or on one foot. When a foot lands, there’s a thousand pounds of pressure held up by that one thin leg, that little hoof the size of a handheld ashtray.” Kick the Latch is composed of taut vignettes with titles such as “Pickled Boiled Eggs” and “I Think You’ll Be Sad”. One dangled truth is compressed to a single sentence: “You’re around some really prominent people and some are just as common as old shoes.” Then there’s “Bicycle Jenny” – who lives in a burnt-out house with 70 “yipping chihuahuas” – a character allowed to fill four pages, foregrounding Sonia’s brusque compassion for those who live on the margins. She turns a one-eyed horse called Dark Side into a champion and rescues a mustang called Chico from a rodeo sale: “I got some weight on him, some calm.” Tenderly, she puts “a little mascot” in the stable of a horse who cannot settle. Growing up in a poor town where drunken fights were common, Sonia’s closest bond was with her first horse, Rowdy, who “raised” her: “He taught me trust. He taught me not to trust too much.” Having graduated from high school, she worked her way up from stable-hand to trainer, gathering a ramshackle “racetrack family” as she went. As a young girl amidst the “grooms, jockeys, trainers, racing secretaries, stewards, pony people, hot walkers, everybody”, she was an easy target. When she refused offers of booze, they called her the “Coca-Cola Kid”. Sonia’s voice vividly depicts the insular, feverish world of the racetrack, its rituals – priests bless the horses’ legs on race days – and its argot, a life dictated by the rhythm of “four o’clock feed, seven days a week”. Her bond with horses is no different from a human bond, providing ample opportunity for intimacy and violence while demanding relentless labour. One tale, “It Wasn’t His Fault”, offers the image of Sonia’s mother dragged behind a bolting pony, “asphalt skiing”. Accidents are dismissed (“I had my spills”) but the stakes are high. Some jockeys are killed racing, others have “steel rods down their spines”. One man hangs himself in the stable. They take B12 shots, injecting themselves with cattle antibiotics. To make weight, they wrap themselves in glycerin and cling film and “hot box” until they pass out. They starve themselves, boasting of their ability to vomit and “flip the rice but leave the beans!” Sonia’s anecdotes are packed with unexpected revelations. Scanlan’s prose is sparse but preserves Sonia’s fascination: when a jockey wins his first race, it’s called “breaking his maiden” and his fellow jockeys “strip him and put black shoe polish on his balls – did you know that?” Male violence is a recurring theme. Sonia sleeps with a butcher’s knife in her trailer. In a brutal scene, after a jockey held a gun to her head she says simply, “I got raped”. Scanlan’s steely formal control conveys Sonia’s rage at having to live with it in “I Saw Him Every Day”. She’s in an abusive relationship with one man for seven years, another hangs her cat. But men aren’t allowed to overspill their tales. Sonia doesn’t give her victimhood that significance. Instead she talks about this life with the fervent precision of an addict, distinguishing between owners who prioritise winning and trainers who walk the track carefully before the race: “There shouldn’t be no rocks. The surface has got to be smooth.” It’s “hard for people who haven’t been there to understand” racetrack stories, Sonia explains in “A Particular Language”, yet she makes us feel their urgency in our bones. Sonia’s stoic devotion and the galloping momentum of Scanlan’s prose carry the reader along: “A racetracker doesn’t say We won a race. A racetracker says We win. It’s not proper English. It’s not We won. It’s not We will win. The race is over, it’s already won, but we say We win, we win, we win.”