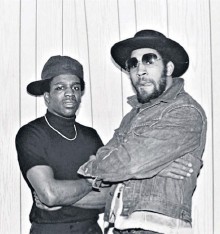 When hip hop first exploded across the pond in the 1980s, conservatives reacted with horror: what was this scandalous music that had come to lead young people astray? But, as this brilliant, nuanced documentary explains, there was more to hip hop than met the eye. Fronted by Public Enemy’s Chuck D, the four-part series features interviews with rappers, such as Fat Joe and Eminem, and academics, plus archive footage. It assesses hip hop’s impact on American society: there’s the brutal beating of Rodney King in LA in 1991 by police officers who were acquitted, and the subsequent riots, soundtracked by rap; Hurricane Katrina, which devastated New Orleans and saw Jay Z and P Diddy lead fundraising efforts; and the pivotal elections of Bill Clinton, Barack Obama and Donald Trump. The first was known as the black people’s president; the second changed history forever; and the last was in power during the 2020 Capitol riots – and ever-growing racial tension. All episodes are available on iPlayer. Documentary Behind the Beat Special: Public Enemy follows, plus a dig through the archives with Hip Hop at the BBC at 11.30pm. Poppie Platt contestants the chance to win “limitless” cash (with some not-very-difficult questions), Belfast-born best pals Conall and Michael continue their journey, before we meet newcomers Jenny and Clive, who are under a special amount of pressure: they’re getting married in the morning. STOCK AITKEN WATERMAN: LEGENDS OF POP Channel 5, 8.30pm If you’re more into cheesy pop than hip hop, this documentary about top record producers and songwriters Mike Stock, Matt Aitken and Pete Waterman is filled with juicy nuggets about the industry in the 1980s and 1990s, from launching the careers of Kylie and Rick Astley to being begged by Simon Cowell to pen a song for Sinitta. The best of Bananarama follows in Greatest Hits: Part 1.