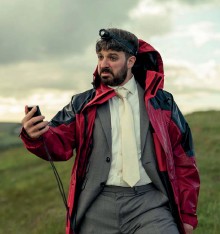 A double header to launch Dillon Mapletoft and Oliver Taylor’s enjoyable sitcom, starring Simon Bird, about a puritanical religious sect. Despite sporting a very weird haircut, Bird essays another version of his characters in The Inbetweeners and Friday Night Dinner as David Lewis, a condescending, permanently exasperated individual who is thwarted in his ambitions – including to become a church elder – at every turn. The Lewis family are members of the Order of the Divine Rod in Manchester, an apocalyptic congregation who believe the end of the world is nigh and that sinners – ie everyone but themselves – will be cast into eternal flames on the day of reckoning. Cracks are starting to appear in David’s life; son Aaron (Harry Connor) is a true believer, but longsuffering wife Fiona (Kate O’Flynn) slopes off to neighbour Melissa (Morgana Robinson) to watch her telly, while teenage daughter Rachel (Amy James-Kelly) is discovering what hormones are for. Her teacher (Lolly Adefope), meanwhile, is encouraging Rachel to apply to Satan’s hellhole, aka university. It’s a warm-hearted comedy as much about family life as religion, with a high gag count. Veronica Lee