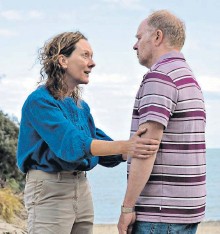 Jason Watkins is a reassuring presence on any cast list, and here he brings real emotional heft to the role of Ed Collier, a Cornish fisherman finding catches harder, competition stiffer and an ageing, possibly sabotaged boat putting real pressure on him and his family – wife Claire (Cathy Belton) and daughter Abbie (Poppy Gilbert). Of more pressing concern, however, is the arrival of Abbie’s new boyfriend, Ryan (Aneurin Barnard): confident, wealthy and with the uncanny habits of saving the day and ingratiating himself with Ed’s nearest and dearest. Does this smooth-talking new arrival represent an existential threat to a family unit bound tight by tragedy some years earlier, or are Ed’s suspicions fuelled by guilt and paranoia? Adapted by Michael Crompton from TM Logan’s popular thriller, The Catch hits a few familiar beats but the performances ensure every possible uncertainty or enigma is played to the hilt, while the Irish coast makes an impressive, persuasive stand-in for Cornwall. Channel 5’s decision to air the series weekly feels like an endorsement of a series that is a cut above some of the potboilers more commonly tossed out over successive nights. Gabriel Tate tales of fake romances, fraudulent retail sites and falsified delivery texts; what are the tell-tale signs of a scam, and how can we better protect ourselves against them as they grow increasingly sophisticated?