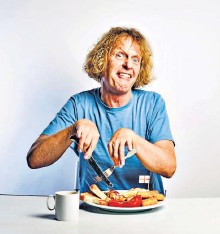 The ever-evolving idea of Englishness has long served as a flashpoint in the culture wars. In this illuminating three-part documentary, the artist Grayson Perry goes on the road to disentangle the debate, meeting with and asking people from all walks of life what Englishness means to them. He begins with wedding DJ Jeremy, who patrols the coast of Dover in search of migrants crossing in small boats. His love of Englishness is shaped by images of spitfires and Second World War street parties; images that, as Perry argues, bear no resemblance to the England of today. It serves as an interesting contrast to the rowdy football fans that he meets in Munich, before an England v Germany game, who surprise Perry with a more progressive form of patriotism. As one fan says, his diverse London borough of Lambeth is as English to him as anywhere else in the country. The latter part of this first episode, themed around the south, sees Perry visiting druids, the country pile of Pearl Lowe, and a fascinating group who campaign for the right to roam by trespassing across the land of Tory peer Lord Benyon. To them, England is the soil beneath your feet. Stephen Kelly