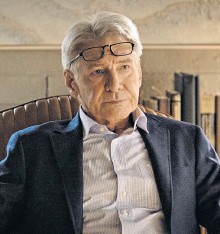 Another high-quality release from Apple TV+, this comedy from Ted Lasso’s Bill Lawrence and Brett Goldstein is founded on an enjoyably droll conceit: a therapist who goes rogue and starts telling the truth to his cossetted patients. How I Met Your Mother star Jason Segel (who also gets co-creator/writer credits) is terrific as cognitive behavioural therapist Jimmy Johns, who’s mired in grief following the death of his wife and crippled by fear that his relationship with his daughter is also disintegrating. Pushed to the edge in the face of his self-pitying and selfdefeating clients, he cracks and starts pointing out harsh home truths to them – and suddenly his breakthrough rate begins, very entertainingly, to rocket. The humour gets a lot darker than Lasso at times, but it’s saved by a smart, snappy script that is backed up by excellent acting. Notably from Luke Tennie as Sean, a young war veteran with serious anger issues, but also by Harrison Ford as Jimmy’s concerned but ineffectual by-the-book boss, Paul, and Jessica Williams as their therapist colleague, Gaby. Lukita Maxwell is a strong presence, too, as daughter Alice – a tougher nut to crack than any client. Gerard O’Donovan tribute to the musical genius of Peter Green, who founded the band and wrote most of its early hits (Albatross, Black Magic Woman, Man of the World) before he was plagued by mental illness. Christine McVie, Noel Gallagher, John Mayall, Pete Townshend, Steven Tyler and Bill Wyman are among the star names involved.