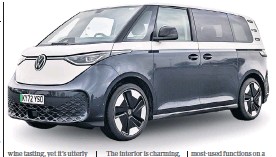 A feat of retro-inspired styling, but pricey. In the UK it costs from £57,115 for the base Life to £61,915 for the better-equipped Style, or £640 a month for the Style on contract hire. But try to forget the price and the 258-mile range on a full battery (nearer 200 in reality), the 2.5-tonne kerb weight and the fact it’s not the Camper, which comes later and is even larger and heavier, and just study it. Retro but not cloying, reminiscent but not mawkish, the ID. Buzz is a five-seat van selling in the MPV segment – which in popularity terms is the equivalent of sub-aqua wine tasting, yet it’s utterly compelling. And, despite the weight, it’s comfortable and good to drive, with wellworked damping and body control, as well as direct and nicely weighted steering. It is also the best-riding of the seven shortlisted cars. The interior is charming, with surfaces reminiscent of the original Type 2 Combi of the 1950s. Bad stuff includes the Cariad software system and central touchscreen, which are disgracefully rubbish, but you can write how to access the major, most-used functions on a yellow sticky note and put it on the dashboard. Original Combis had similar notes on the dash reminding you to top up the oil, so nothing much changes – price apart. Although it didn’t win the award it’s my car of the year.