Goodbye to the age of golden retirement

‘Defined benefit’ pensions that gave baby boomers well funded retirements are rapidly dying – so what do the rest of us do, asks Lauren Almeida 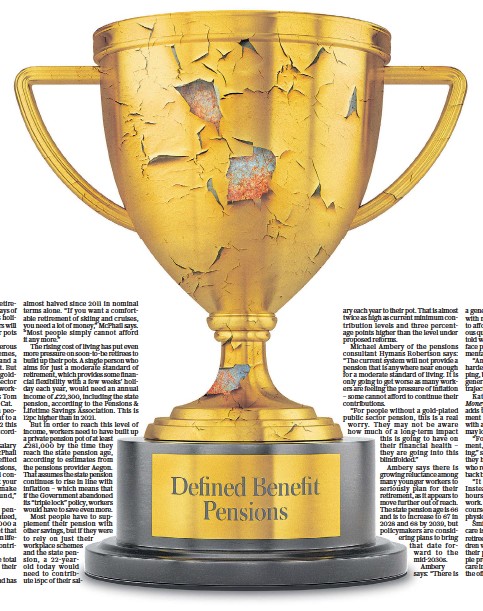 The golden era of British retirement is over. Gone are the days of long cruises and luxurious holidays – the next cohort of pensioners will have to learn to cope with leaner pots and more work, experts warn. Older generations enjoyed generous “defined benefit” pension schemes, a boom in the housing market and a long bull run in the stock market. But the gradual disappearance of goldplated pensions in the private sector has left hundreds of thousands of workers “scratching their heads”, says Tom McPhail of consultancy The Lang Cat. In 2012 there were 12.8 million people with some kind of entitlement to a defined benefit pension. By 2022 this figure had fallen to 9.7 million, according to the Pensions Regulator. “People in their 80s on final salary schemes are doing very well,” McPhail says. “This generation has benefited from three major booms – in pensions, housing and stocks. But ‘defined contribution’ pensions, which invest your money in the stock market, make retirement much harder to fund,” McPhail adds. “Someone on a final salary pension could feasibly have a guaranteed, inflation-linked income of £50,000 a year. It is almost impossible to get that level of income from the maximum lifetime allowance [with a defined contribution pension],” he says. The lifetime allowance caps the total amount that anyone can have in their pension tax-free at £1.073m. It has been frozen until 2026 and has almost halved since 2011 in nominal terms alone. “If you want a comfortable retirement of skiing and cruises, you need a lot of money,” McPhail says. “Most people simply cannot afford it any more.” The rising cost of living has put even more pressure on soon-to-be retirees to build up their pots. A single person who aims for just a moderate standard of retirement, which provides some financial flexibility with a few weeks’ holiday each year, would need an annual income of £22,300, including the state pension, according to the Pensions & Lifetime Savings Association. This is 12pc higher than in 2021. But in order to reach this level of income, workers need to have built up a private pension pot of at least £ 281,000 by the time they reach the state pension age, according to estimates from the pensions provider Aegon. That assumes the state pension continues to rise in line with inflation – which means that if the Government abandoned its “triple lock” policy, workers would have to save even more. Most people have to supplement their pension with other savings, but if they were to rely on just their workplace schemes and the state pension, a 22- yearold today would need to contribute 15pc of their salary each year to their pot. That is almost twice as high as current minimum contribution levels and three percentage points higher than the level under proposed reforms. Michael Ambery of the pensions consultant Hymans Robertson says: “The current system will not provide a pension that is anywhere near enough for a moderate standard of living. It is only going to get worse as many workers are feeling the pressure of inflation – some cannot afford to continue their contributions. “For people without a gold- plated public sector pension, this is a real worry. They may not be aware how much of a long- term impact this is going to have on their financial health – they are going into this blindfolded.” Ambery says there is growing reluctance among many younger workers to seriously plan for their retirement, as it appears to move further out of reach. The state pension age is 66 and is to increase to 67 in 2028 and 68 by 2039, but policymakers are considering plans to bring that date forward to the mid-2030s. Ambery says: “There is a generation going into the workforce with no expectation of ever being able to afford to retire. There is also a serious quality of life question: we are being told we have to retire later, but then we face poorer health – both physical and mental deterioration. “And it seems that we are working harder for less. Real wages are dropping, but the total hours worked by the general population are on an upward trajectory.” Kate Smith of Aegon, Telegraph Money’s Pensions Doctor columnist, adds that the idea of a “golden” retirement is quickly fading, to be replaced with a new idea of what our final years may look like. “For people approaching retirement, their whole attitude is changing,” she says. “Most people accept that they have to work longer – even those who retired early are beginning to come back because of cost of living pressures. “It is not a cliff edge any more. Instead, people are reducing their hours or trying a different avenue of work. This can be very fulfilling, but of course working for longer can have a physical and mental strain too.” Smith says an increasing burden of care is falling on the next generation of retirees, who are helping their own children with childcare as well as caring for their parents. Almost two million people provide up to nine hours of unpaid care in England and Wales, according to the official census.