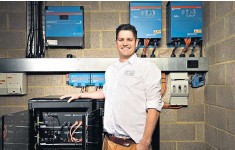 The benefits of energy- saving tech such as heat pumps and solar panels, are increasingly well known. But savvy homeowners are going one step further and investing thousands of pounds in batteries that allow them to store up cheap energy for future use – and slash their bills. Homeowners with solar panels, for example, can sell any surplus energy they generate back to the grid to knock money off their power bills. But these schemes typically now pay a much lower rate for electricity than previous, more lucrative tariffs. Steve Skilton has instead opted to bypass this low rate of return with a more unconventional method – one reliant on a small tower of batteries. He estimates it saves him 77pc of the day- time rate – which he claims equates to £12,000 over a year. Skilton, 64, is on an Economy 7 tariff, available through most providers, through which he pays a lower rate of 10p per kWh for the electricity he uses between 11.30pm and 5.30am, when demand on the grid is at its lowest. He pays a higher rate of 43p per kWh for the electricity he uses in the day through his supplier Octopus. By most standards, Skilton’s energy consumption is high. Smart meter data show he uses over 100kWh a day to power his large home which – during the winter – would cost £10 a day on the night-time rate and £43 a day on the normal rate. But he never pays this higher rate. Instead, he takes advantage of the low overnight costs to charge a fleet of batteries, which is enough to meet his energy needs through the day, saving him 33p per kWh of electricity of what he uses. That equates to a saving of 77pc on day-time costs. “It’s a good investment period,” he says. “The payback period is around two years, so I’ll get 20 years’ usage out of them and by then the new technology will be better and cheaper.” Skilton’s set- up cost £ 18,000 – £9,000 for two packs of six 5kWh batteries. He describes it as a “very simple system” that does not take up too much space. An inverter, which allows electricity to pass between the grid and a home, cost an additional £2,500. Skilton has two, in case one fails. Batteries are often mentioned in the same breath as solar as a way for homes to become more self-sufficient. However, Skilton does not have panels. If he did, he says, he would store the power they generate rather than export it, as the rates for doing so are very low. He says: “Selling solar at 5p per kWh is crazy. If you’re going to do any solar these days you should be storing it to a battery.” Most “net-zero homes” work with a “top-up system”, where solar panels and batteries offset some electricity costs, but will not be enough to meet all of a home’s energy needs, says Paul Knight, of engineering company Off Grid Pro. Even a home with a Tesla Power Wall, one of the most popular models, using £ 500 worth of electricity a month, would run out of stored energy before cheaper rates kicked in overnight. Unlike these, Skilton’s set-up is a “whole house system”, meaning the batteries cover 100pc of the home’s energy costs. The green technology comes with a hefty price tag – understandably off-putting during a cost of living crisis – but as energy bills are unlikely to fall anytime soon, Knight typically advises, if you can afford it, to invest £10,000 to £ 14,000 on a hybrid system of solar panels and batteries. Households with high energy consumption levels and with the cash to spare, he argues, should go for a “whole of house system”, like Skilton’s, though this can cost as much as £40,000. Households with an electric vehicle may already be halfway there, however. Thanks to vehicle-to-home charging, EVs function similarly to Skilton’s battery set-up, charging overnight at a low rate and powering the house in the day while sitting idle on the drive. Ovo Energy, a supplier, says doing so could save the average driver £ 920 a year in energy costs, using today’s rates. This is calculated on an Economy 7 tariff, while some providers offer EV-specific tariffs with even better rates. However, at present, very few such tariffs exist. Conor Maher-McWilliams, Ovo’s EV expert, says this is because the take-up among providers has been slow as the market is “still at an early stage”. He says: “Over the next five to 10 years ‘ V2H’ has huge potential. If your car is sitting there it becomes a compelling proposition.” Powering a home using a tariff like Economy 7 relies on smart charging technology, but as Britain winds down its dependence on gas this will mean off-peak times will become less simple than they are now.