The threat to Britain’s beach huts

They are an iconic seaside sight, but now owners are facing huge annual price rises to hang on to their treasured boltholes, writes Benedict Smith 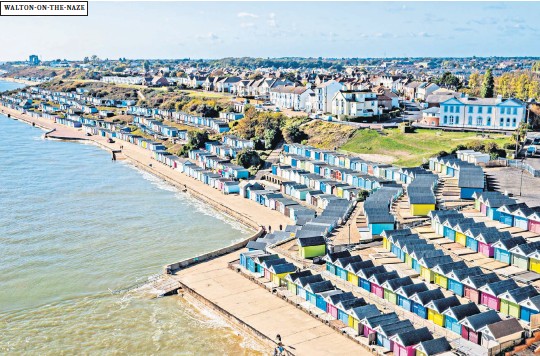 Peter Revell was walking along the Hove seafront about 10 years ago when he stopped in his tracks. The former solicitor, who had recently left Surrey for the seaside, had spotted a run-down beach hut with a “for sale” sign attached. On the spur of the moment, he decided to buy it. “I thought, if we don’t buy it now we probably never will,” Revell says. “I didn’t really know what we’d get out of it but I’ve absolutely loved it. I think they’re iconic.” Is there anything less suited to life by the sea than a beach hut? Exposed to high winds and sea spray, most would quickly rot away without regular coats of paint and constant care. It is only thanks to generations of owners that these glorified sheds have been a fixture of Britain’s coastline for three centuries. But residents have bigger problems than the seaside’s unforgiving climate. They need to pay the local authority’s licence fee every year and prices have been rising for a long time. Now, with inflation in the double digits, some will need to stump up thousands of pounds more per year. In Brighton and Hove, which is home to more than 400 beach huts, owners successfully faced down a 10pc sales tax after threatening legal action. But there was a sting in the tail when the expected 5pc rise in the £457 annual licence fee was doubled at the last minute. The council is grappling with a £20m funding shortfall for next year and points the finger at central government cuts. “Price rises are inevitable and necessary if we are to safeguard the services and facilities we value,” a spokesman says. Revell agrees the council is desperately short of cash, but says hut owners cannot plug the holes in its budget. “You’ve got better-off people, worse-off people – it’s a real mix,” the 59-year-old argues. “If they keep pushing up fees, then beach huts will become the preserve of the rich.” Historian Kathryn Ferry, author of Sheds on the Seashore, believes local politicians are using beach huts as a “cash cow”. She says: “They have been turned into a bit of a luxury and in their 1930s, post- war, 1950s heyday that wouldn’t have been the case.” To the west, Bournemouth, Christchurch and Poole council – which covers a highly sought-after stretch of coastline – is pushing prices up even higher. From April, licence fees will rise by between 10pc and 26pc depending on the site, followed by double- digit increases for another four years. Some owners will end up paying £ 8,000 annually for a beach hut. The local authority claims the “simple pricing system” will mean fairer rates and lead to a £4.4m investment in the seafront. For what it terms as a “harmonisation programme”, though, it is certainly sowing discord among locals. Ann Gerrard, a Bournemouth retiree, thinks the council’s attitude to beach huts has hardened. “They are suddenly making out that they’re this luxurious item and everybody’s envious of us,” she says. “But they are used by retired people, families who can’t afford to go on holiday. We’re all strapped.” Demand for beach huts is astonishing: one in nearby Mudeford went on sale last autumn for £440,000. Over the years, they have been sought out by everyone from Queen Victoria to Keith Richards of the Rolling Stones. But many residents, who want to keep hold of their little piece of the seaside, cannot afford inflation-beating licence fees. Melanie Whitehead, 50, says councils are keeping a close eye on beach hut values. As the owner of a hut – painted white with yellow stripes – in Walton- on- the-Naze, Essex, she has been unnerved by a consultation on replacing the licence fee with a pricier lease. Tendring council says its fees are among the lowest in the country and that its latest rise was just 2pc. Bringing in a lease would mean greater security of tenure, it adds. But Whitehead pushes back. “We thought we were quite secure so we’re not particularly interested in having greater rights over the land,” she says. “We just want a fair landlord who treats us well.” With prices rising along the coastline, some believe beach huts will be snapped up by wealthy out- of-towners. Others think they will fall into disrepair as owners struggle to afford maintenance costs, and gradually disappear. Either way, a centuries- old seaside tradition is at risk of being washed away. “It’s a bit of a strange thing, beach hutting,” Whitehead says. “It’s having a cup of tea by the beach and being able to have somewhere to retreat when it inevitably rains. You either get it or you don’t.”