‘I manifested a book deal and a relationship’

When writer Radhika Sanghani first read about the practice, where you use your thoughts to get what you want, she thought it was hokum. But then she tried it herself…

‘Thirty Things I Love About Myself ’ by Radhika Sanghani is out now (£15.99, Headline Review) 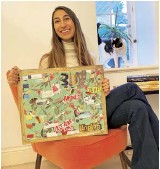 THE FIRST TIME I manifested my desires, I was 22, lying on a beach in Barcelona. I was half-heartedly reading The Secret, Rhonda Byrne’s bestselling book on the law of attraction, after finding it in my flatmate’s room. It claimed that if I desired something, all I had to do was believe I already had it, feel all the positive feelings this led to, then simply let go. My desire would then come true. I read this with scepticism – surely if life was that simple, there’d be no poverty and we’d all win the lottery? But there was a handsome man near me who I’d been admiring for the past hour, so I laughingly tested it out on him. I closed my eyes, feeling slightly ridiculous, and visualised him talking to me. I smiled as I imagined us flirting and then ‘let go’, by accepting I’d be fine if it didn’t happen. I opened my eyes and waited. Five minutes later, he caught my eye, grinned, and asked if he could join me. Next thing, he was telling me about his life as a model in South Africa and suggesting we go for drinks; he knew a great flamenco bar. I had officially manifested a date. That was almost a decade ago – we had a fun evening, but he caught a flight home so we never met again – but I’ve been manifesting ever since. Manifesting, essentially the idea that your thoughts will come true, has been around for centuries, but went mainstream in the 1980s and recently, it has had another resurgence in popularity with celebrities including Oprah Winfrey, Will Smith and Gwyneth Paltrow all saying their success is down to the power of manifesting. At first, I was sceptical. Surely the results were coincidences, or had rationally come about because of my goal-setting. But as I grew to embrace spirituality in recent years, learning about the power of my subconscious and meditating regularly, it no longer seemed so strange and eventually I took manifesting seriously. The most powerful moment for me was in 2019, when I was writing my latest novel, a comedy about a woman going on a self-love journey and exploring manifesting, among other spiritual things. I wrote a cheque to myself from the universe for a generous sum that I hoped I’d one day receive for the book. Exactly a year later, my agent – who had no idea what figure I’d manifested – told me I had offers from major publishers. The advance offered was the exact amount I had written on that cheque, which nobody knew about but me. Since then, I’ve fully embraced it. I regularly write cheques to myself for work projects, I do a vision board every birthday to focus on what I want that year, and I practise manifestation meditations whenever I want to make something a reality – like getting on to the BBC’s development scheme for comedy writers in 2019. Seconds after my meditation, I received an email confirming my place. I’ve discovered that you can manifest anything – but you have to truly believe it will happen. So if you want to buy a huge house but can’t afford one, it will probably be hard to genuinely imagine it happening for you. In that situation it would probably be easier to manifest a pay rise or renting your dream property – a step on the ladder to your goals. As for how to do it, there isn’t a specific way. I like to sit in a quiet space and close my eyes, sometimes I’ll light a candle. The most important thing is to really focus on what you want. I do it several times a week, even if I’m just manifesting a good start to a Monday. When I’m having a quiet month as a freelance writer, I turn to manifesting rather than manically sending emails looking for commissions like I used to. After a couple of days of channelling positivity, I find I have offers of work. I’ve even used manifestation for relationships, including during the pandemic when finding love felt impossible. After the first lockdown, during which I manifested finding someone kind and handsome who understood my world, I went on a few Tinder dates and found love with a fellow writer. We often joked that I’d manifested him, and although he didn’t fully believe in it, he couldn’t deny all the amazing things manifesting has brought to my life. Friends and family have similar reactions: they think it’s mad but they’re glad it’s working for me. That relationship has now ended (maybe I subconsciously manifested that too). He didn’t want the same future and as sad it was to lose him, I’m now free to find someone who does. So I plan to keep on manifesting in 2022 – for a TV show, for my book to become a bestseller, and yes, another relationship. Let’s just hope the universe is listening.