‘Despite all that piffle about going on a journey, nobody properly travels for the telly’ 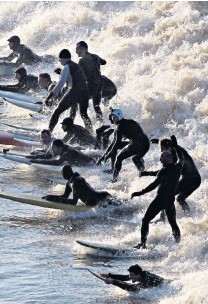 Despite all that piffle about “going on a journey” nobody properly “travels” for the telly. (You drag along three colleagues to discuss expenses all evening, for a start.) What you get is “access”. You get privilege – secret places the ordinary tourist can’t go – such as the sewers beneath Salford. There are very few parties of obnoxious schoolchildren at the No7 main flow intersection, 15ft down there. It was literally (and I use this word advisedly) a stirring experience. Our torches shone on a veritable Victorian cathedral of effluent (interestingly, rather more magnificent than anything on the surface). Massive iron gates were festooned with long chains of… well, use your imagination. Or don’t. We were slopping along a river of unutterable gunk and I was there with the maintenance gang. We wore drysuits and fully enveloping helmets, but I had to speak to camera, so had taken my helmet off. “Beneath my feet,” I intoned, “is a cocktail of putrid toxic waste” (too much? I don’t think so). I gestured at the goo, tripped over an old brick and fell face-forward into it. Now that was access. But the point is, they dragged me up, wiped me down and we carried on, and apart from my visit to London’s duodenum, the Fleet river, which I entered down a manhole just past Cleopatra’s Needle to see a fatberg, I can’t say I have ever enjoyed such a spirited underground adventure. But a week later I was in Gloucestershire. I had gone to surf the Severn Bore and began to feel a little dodgy. I had aching limbs, a sore throat and a feverish headache. I knew it could only be one thing. I was dying. My mind went back to my mishap in the bowels of the North. “I can’t surf the bore today.” I said. “I need to see a doctor.” They kicked the sound man out of the car and got me privileged access to a local GP, somewhere near Upper Framilode. He was Irish, of mature years and had studied Dr Finlay’s Casebook. “I think I have Weil’s disease,” I told him. “Weil’s disease? Why?” “I fell flat on my face in a sewer last week.” “How?” “It’s my privileged position as a television presenter. And now I have those flu-like symptoms that can lead to kidney failure and early death among those exposed to rat’s urine in the pursuance of their ghastly trade.” “Really? So, it’s Weil’s disease?” “Maybe. I’m not a doctor.” “No. But I am… Now, Weil’s disease… I think I had better look this up in my big book of medicine.” He rose from his leather armchair. “Being here by the Severn, I see a lot of watermen and sewage and drainage workers. And I have to say, in 40 years of practice, I have never yet come across a case of this… what did you call it? Weil’s disease.” “Right. Only they warn against it in safety instructions.” “Do they now?” He had a big old book in his hands now. “Is that with a ‘W’ for Weil? Or maybe a ‘V’ if you pronounce it the German way, as you seem to do. Weil…” “Yes. Well, I assume he was a German.” “Yes.” He read. He paused to look at me over the top of his glasses. “Now, it says here that it takes at least six weeks for any symptoms of Weil’s disease to develop.” He shut the book. “Was it only a couple of days ago you fell in the poo?” “Yes.” “Ah. Do you know? I don’t think it’s Weil’s disease.” “No.” “But If you get any symptoms in, say, about five weeks, do give me a ring. There is a quite a lot about it in my big book here.” But I just want to say to all of you checking your glands and taking your temperature on an hourly basis at the moment – and especially if, like me, you have become convinced you’ve already had coronavirus three or four times – that self-diagnosis is a complicated thing. You genuinely have my sympathy. And that is why we need tests. I didn’t get that crucial sick note from the doctor. And, do you know, in the end, the Severn Bore wasn’t nearly as scary as it had seemed. Read more of Griff Rhys Jones’s travel writing at telegraph.co.uk/ travel/team/griff-rhys-jones