THE ANIMAL KINGDOM IN BLACK AND WHITE 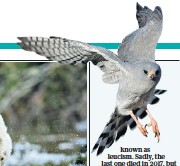 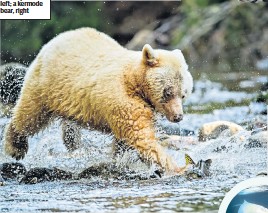 Melanism is caused by a recessive gene that increases the development of melanin, the darkcoloured pigment present in fur and skin. One agreeable result is a leopard with a coal-black coat (see main story) although, if you look closely, you can make out its characteristic pattern of spots and rosettes. The phenomenon is by no means confined to leopards. Black wolves occur among the grey wolf packs of North America, and East Africa is also home to black serval cats like the one I was lucky enough to observe and photograph at Namiri Plains in the Serengeti. Here is a guide to seven more monochrome species and where to find them: SERVAL Its coat is normally spotted but rare melanistic examples of this small African wildcat occur, most recently at Namiri Plains in Tanzania’s Serengeti national park. BLACK WOLF Black wolves, a melanistic variation of the grey wolf, are relatively common in parts of North America, especially in forest areas of the Canadian Arctic. WHITE LION The famous white lions of Timbavati were not truly albino, but the result of another genetic mutation known as leucism. Sadly, the last one died in 2017, but there are about 400 in captivity around the world. The only white lion left in the wild roams around Singita Lebombo in South Africa’s Kruger National Park. WHITE WHALES The most famous white whale in the world is Migaloo, a 35ft male albino humpback. First spotted in 1992, he turns up every year off the east coast of Australia. Unlike him, the white beluga whales of the Arctic Ocean are not albinos. They are born dark grey and don’t turn white until they are eight years old. KERMODE BEAR Also known as the “spirit bear”, no more than 400 of these white-coated American black bears exist, exclusively confined to British Columbia’s Great Bear Rainforest. GABAR GOSHAWK Melanism occurs in up to 25 per cent of the entire population of this small African bird of prey. Look out for them in South Africa’s Kgalagadi Transfrontier Park. CHILLINGHAM WHITE CATTLE Confined to an enclosed park at Chillingham Castle in the rural heart of Northumberland, this rare breed is one of the least common animals on earth. These blond bovines are reported to be the only survivors of the wild herds that once roamed Britain’s forests.