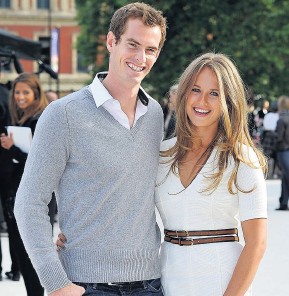 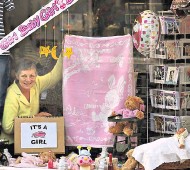 FACED with the dilemma of who to tell first about the arrival of his daughter, Andy Murray tried to tell his whole family at once by texting them all a picture. But his plan backfired when his grandparents were unable to open the message, leaving them baffled. It took another 24 hours before they found out that Murray’s wife Kim Sears had given birth to a strapping 8lb 10oz girl in the early hours of Feb 7. The couple have not yet announced her name. Mother and child are “doing well”, according to Murray’s agent, but the couple, described as “very private people”, did not release a statement or photographs and do not intend to do so. It meant that news of the birth, which had been eagerly anticipated since Murray’s announcement that he would pull out of the Australian Open if necessary to be present, remained secret from the outside world for 48 hours. Describing how she heard the news, Murray’s maternal grandmother, Shirley Erskine, said: “Andy had sent a text round all the family – one of these multi-media type texts – and then I got a text from him saying something about ‘no name yet, but she’s doing really well’, and I thought, ‘Oh, something’s happened’. “I was absolutely delighted. All I could think of was everybody was well. They’re still deciding on her name.” Mrs Erskine, who lives in Murray’s home town of Dunblane with her husband Roy, said the couple had not known the sex of their baby before she arrived, “so it was nice to get a little surprise like that”. Murray’s paternal grandmother, Ellen Murray, 82, said she and her husband Gordon had not found out until the following day, when her grandson had phoned her to say, “Congratulations, you’re a great granny.” Speaking from her home in Kilsyth, in Lanarkshire, she said: “It’s wonderful news. We watched him in the Australian Open final and I think he just wanted to come home. I’ll be looking forward to a cuddle. They did a good job, aye.” Dunblane’s High Street quickly turned pink as shops tried to outdo each other with their baby girlthemed window displays. Nicola Kitt, a florist, gave away “Baby Girl” balloons, saying: “The whole of Dunblane is happy – everyone’s excited for the family.” The Murrays, who married last April and are both 28, will spend the rest of February together at their Surrey home before Murray returns to the ATP Tour in March. Stewart McClymont, a childhood friend of Murray, joked: “They’ll be in for plenty of sleepless nights but it’s more than worth it. I just hope she doesn’t make too much of a racket!” Murray was back in the UK after catching the first flight out of Melbourne following defeat to Novak Djokovic in the Australian Open final. The birth capped an eventful few months for Murray. Having missed out on the finals of the French Open and Wimbledon, he guided Great Britain to a first Davis Cup win in almost 80 years, and was named BBC Sports Personality of the Year for a second time. The birth will also be a fillip to Murray’s father-inlaw, Nigel Sears, who collapsed in Melbourne and was taken to hospital. He was later flown back to the UK and has made a good recovery. Coral has already offered odds of 250/1 on baby Murray winning Wimbledon within 30 years, and 100-1 that she wins any Grand Slam title.