Proof of Einstein’s theory of ripples arrives in a chirp 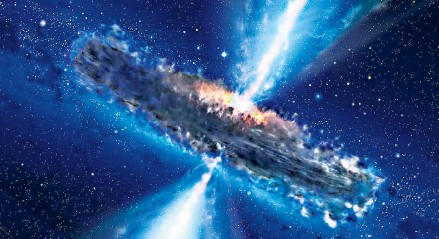 MORE than one billion years ago a colossal storm raged in the universe as two huge black holes collided and merged. The impact was so powerful that it shook not only space but also time, sending a ripple through the very fabric of the universe with 50 times more energy than all the stars combined. The shockwave rolled out in all directions and entered our own galaxy, the Milky Way, just as modern humans began to expand throughout the world some 40,000 years ago. On September 14 last year, that ripple finally arrived on Earth and was picked up as a “chirp” by the world’s most powerful detector, a discovery hailed as significant as Galileo pointing his telescope to the heavens. It has been a long time coming. One hundred years ago, Albert Einstein predicted such gravitational shockwaves must exist, as part of his General Theory of Relativity, but it remained his unfinished symphony, and scientists have been searching for proof ever since. “It’s been a very long road, but this is just the beginning,” Gaby Gonzalez, professor of physics and astronomy at Louisiana State University told a press conference in Washington. “It happened when life on Earth was just beginning to spread and it took a billion years to come to Earth.” Einstein’s genius was in suggesting that space should not be seen as a vacuum but rather as a four-dimensional “fabric” that could be warped by huge bodies, like planets, in the same way that a heavy ball would distort a rubber sheet. He expected violent collisions in the universe would produce ripples in that fabric but even he did not believe that they would be detectable, and twice declared that they did not exist. The problem was building an instrument that was sensitive enough to catch the dying shockwaves. Decades after Einstein’s prediction, scientists began to consider how to create such an instrument. The first attempt was by Joe Webber, an engineering professor at the University of Maryland, who believed that waves could be detected using an aluminium cylinder. Prof Webber announced that he had found the waves, but his experiments could not be replicated. It was Raine Weiss of Massachusetts Institute of Technology who first suggested building the Laser Interferometer Gravitational-Wave Observatory (Ligo) in 1972 and by the early Eighties he had constructed the first prototype with Kip Thorne of the California Institute of Technology and the Scottish physicist Ronald Drever, formerly of Glasgow University. In 1990, the trio persuaded the National Science Foundation to fund the construction of Ligo at a cost of more than $272 million and it finally became operational in 2001. A five-year, $200 million upgrade took the detector offline in 2010 and it was not switched back on until last September, just in time to pick up the chirp. Prof David Reitze, executive director of Ligo and professor of physics at the University of Florida, said: “We did it. This was truly a scientific moonshot, and we did it. We landed on the Moon. What’s really exciting is what comes next. Four hundred years ago Galileo turned a telescope to the sky. I think we’re doing something equally important. I think we’re opening a window on the universe and an era of gravitational astronomy. “It’s mind boggling. It’s the first time the universe has spoken to us through gravitational waves. Until now we have been deaf to gravitational waves, but now we can hear.” Ligo is actually two observatories, separated by nearly 1,900 miles, one in the swamplands of Louisiana and one in Washington state. The L-shaped device splits a single laser beam into two and sends both beams shooting off at right angles to each other. The beams bounce off mirrors in a tunnel and should travel equal distances. But a passing gravitational wave can change the distance that each bends relative to the other. Prof Thorne added: “Until now we have only seen warped space time when it’s very calm. We had never seen the ocean in a storm with crashing waves. All changed on September 14. They created a violent storm in the fabric of space time. A storm in which the shape of space was bent. The storm is brief – 20 milliseconds – but very powerful. The total power output was 50 times greater than all of the power of all of the stars in the universe.” The chirp was first picked up by Marco Draco, 32, a postdoctoral student who was working with the Ligo team at the Albert Einstein Institute in Hannover, Germany. A squiggle on the screen that usually pulsated up and down with background noise suddenly gave a little jump. Scientists said the discovery ushered in a new era of “gravitational astronomy’” and a “new window” through which to view the universe. Prof Sheila Rowan, director of the University of Glasgow’s Institute for Gravitational Research, said: “It’s amazing to realise that we turned on our detectors on the centenary of the year Einstein’s General Theory Of Relativity was published and at exactly the right time to receive this signal coming to us from 1.5 billion years ago – when far out in the universe two black holes spiralled in to collide. “This detection marks not only a confirmation of Einstein’s theories but most exciting is that it is marks the birth of gravitational astronomy. This expands hugely the way we can observe the cosmos. Not only does it prove the Theory of Relativity, it is the first physical proof that black holes exist. Prof James Hough, a Glasgow University physicist and Ligo member, said: “Until you can actually measure something, you don’t really know it’s there. I think this is much more significant than the discovery of the Higgs boson. “This is the biggest scientific breakthrough of this century.”