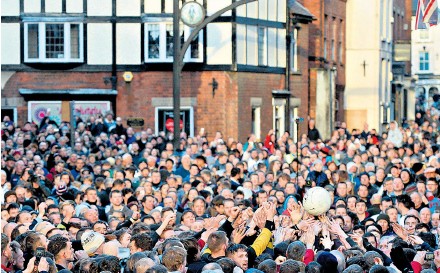 A SHOPPER narrowly escaped serious injury after plunging over the side of a balcony in a John Lewis store only to land on a display bed. The 60-year-old woman fell about 60ft from the upper floor, suffering hip and spine injuries. She is understood to have tumbled over a glass balcony by the escalators. “Her injuries are not thought to be serious and it appears that she fell on to a bed,” a spokesman for John Lewis said. The woman was taken to hospital following the incident at the chain’s shop in Cheadle, Greater Manchester. A spokesman for the North West Ambulance Service said that an air ambulance had been sent to the scene along with three hazardous area response teams. The John Lewis spokesman added: “We closed the shop immediately and are offering partners who witnessed the incident our full support. We are continuing to work closely with the emergency services and have passed on CCTV footage to the police.” In December 2014 a man fell from a fifth-floor escalator in one of the retailer’s London branches. On that occasion, police, paramedics and a helicopter ambulance were called to Peter Jones in Sloane Square, one of the partnership’s flagship stores. The man, believed to be in his 20s, suffered multiple injuries and was taken to hospital. The Metropolitan Police said at the time that the man’s injuries had not proved to be life-threatening and that the fall was not being treated as suspicious.