Changing of the guard in Burma’s deserted capital 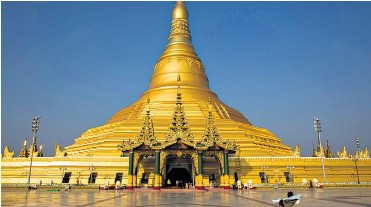 As my taxi made its way down a 20-lane highway with only a couple of sputtering motorbikes for company, it was the oppressive emptiness of Naypyidaw that was most striking. I had earlier eaten breakfast in splendid isolation in one of the many barely occupied establishments in the “hotel zone”, the attentive staff relieved to have a single guest to serve. Burma’s junta-built capital appears almost devoid of people and of noise – the essential ingredients of life in South East Asia. There were no pedestrians, just knots of straw-hatted street-sweepers. What the world’s weirdest capital does have in abundance are grandiose buildings, though these hulking ministries and offices are hard to spot, set as they were far from prying eyes by the old military rulers. The place would have provided fertile terrain for the writings of George Orwell, who spent five years as an imperial policeman in Burma. There are many esque flourishes, not least the massive colour-coded apartment blocks built for civil servants. As we made our lonely journey across the city, the dominant feature was a golden pagoda built as a replica of Rangoon’s historic Shwedagon. Its official name is Uppatasanti, but everyone here calls it simply Than Shwe’s pagoda, after the country’s long-time military strongman. The general ordered the overnight move of the government from Rangoon to Naypyidaw in November 2005, at a time and date laid down by his personal astrologer. But unlike the Shwedagon, this pagoda is hollow. For many Burmese, that was a suitable metaphor for the junta’s new capital. Naypyidaw means “abode of kings” – a name that tells you how Than Shwe viewed his military regime. But I was here because there was a new power in town: the democrats have taken over this dictator’s Disneyland. The city was created to reduce the danger of another domestic uprising like the 1988 protests. The paranoid generals also feared a foreign invasion and wanted a site that was easier than Rangoon to defend – or flee from. There is said to be a maze of hidden tunnels, while those broad boulevards along which I travelled could double up as landing strips in an emergency. But in the end, the military and its political proxies were defeated at the ballot box in the November election landslide for Aung San Suu Kyi’s National League for Democracy (NLD). And my destination last week was parliament, a sprawling complex of 31 cavernous structures, to witness a remarkable transition of power. Ms Suu Kyi, once the world’s most famous prisoner of conscience, led her fellow former political detainees and dissidents into the seats of the ex-generals who were for so long their captors. “It’s a good feeling to be taking power here in the city the junta built,” noted U Tin Thit, a poet and former prisoner who defeated an ex-minister of defence in November. His smile conveyed much more than his words.