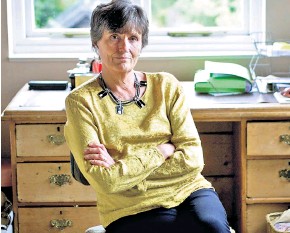 Margaret Forster, who has died aged 77, was a prolific writer who enjoyed equal success as a novelist and biographer, and also wrote forcefully about the change in opportunities available to women and the working classes as a result of post-war liberalisation. A witty, compassionate observer of the ordinary, and with the gifts of a born storyteller, Forster enjoyed both critical and popular acclaim, but although she enthralled thousands of readers with her stories of women’s lives, that of her own remained largely unknown; notoriously reclusive, she seldom gave interviews, refused to promote her books in person, and insisted on having it written into her contracts that she would never be asked to give lectures, attend authors’ lunches or make personal appearances at book-signings. In private, however, she was sparky, vibrant and forthright, and would regale visitors with gossipy stories celebrating her long and conspicuously happy marriage to the journalist Hunter Davies, whom she married on the day she completed her finals at Oxford. Forster presented herself as something of a paradox: having edited the poems of the lyrical Elizabeth Barrett Browning, she claimed to hate music (“It’s only noise”), and although she read voraciously, she would never go back and re-read, except for work. In all, she produced 25 novels and a dozen works of non-fiction, including biographies of Daphne du Maurier, Thackeray and Bonnie Prince Charlie. However, she dismissed many of her early novels as “skittery”, insubstantial products of a hectic life as a young mother bringing up three children. But she stood by her second novel, (1965), which became a successful film, starring Lynn Redgrave as a free-spirited working-class girl finding her feet in 1960s London, with a title song that became a hit for the Seekers. With £4,000 of the proceeds, Margaret Forster bought a bungalow for her mother. Her fourth novel, (1967), described the visit of a strict Glaswegian mother to her three children, and her disapproval of the luxuries and moral laxities of their lifestyle. This horrified encounter with a wider world – and one in which opportunities for bright workingclass children and for women, were increasing – was an enduring theme. It was a particular focus of Margaret Forster’s memoirs of her family. Of these, the most critically acclaimed was (1995), in which she unravelled the secret internal life of her own Forster clan in Carlisle. Following her mother’s death, Margaret Forster had delved into parish records to discover that her grandmother, Margaret Ann, was the illegitimate daughter of a servant girl. Margaret Ann herself became a servant and before her marriage produced an illegitimate daughter of her own. The daughter – although she lived a couple of streets from Margaret Forster’s family – appeared only after Margaret Ann’s funeral, when she called to ask whether she had been left anything in her will. It was this story of Northern working-class women and the drudgery of their household chores that Forster anatomised in She drew a picture of the dirty, grinding provincial lives of three women imprisoned by the social constraints of their time and class. Hailing it as Forster’s crowning achievement, the critic Claire Tomalin urged its inclusion on the A-level syllabus as “a slice of history to be recalled whenever people lament the lovely world we have lost”. Margaret Forster was born on May 25 1938, the daughter of a fitter, and grew up on the Raffles estate in Carlisle. Her mother Lillian had had to give up a good job as a secretary when she married, and Margaret Forster was later to write about the sacrifices that she had made to bring up her family. It took some time for her to discover the details of her background, however; when she was eight, she raced home from the Brownies, eager to complete a family tree project she had been set, but encountered such reticence from her mother that she abandoned it. A combative socialist and lifelong feminist, Forster herself was, she later maintained, a difficult, sulky child who discovered books at Carlisle and County High School, from which she won an open scholarship to Somerville College, Oxford, to read History. There, like her friend, the playwright Dennis Potter, she discovered that her background had become fashionable, and hammed up her working-class origins. On graduating in 1960 she married Hunter Davies and moved to London, where he had landed a job on When her first novel (later reworked as was rejected, she taught English for two years at Barnsbury Girls’ School, saving her salary so that she and her husband could buy a four-storey house in Dartmouth Park, north London, for £5,000 in 1963. In her spare time she wrote based loosely on her time at Oxford and which launched her as a novelist – albeit, in her view, “in the wrong direction” – when it appeared in 1964. After several more novels, Forster only managed to achieve what she regarded as her natural writing voice 10 years later with (1974). Following the success of Forster produced (1998), featuring her own father, whom she disliked. The book was awarded the JR Ackerley prize for autobiography. Enthralled by the flourishing of feminism, she produced a study of the movement’s origins in (1984) and spent three years writing (2001), in which she compared modern wives with spouses from the past. Her final novel, appeared in 2013. Margaret Forster relished the writer’s life, and the monastic top-floor room at her home where she handwrote – never typed – her prodigious output. Although she tended to alternate between novels and non-fiction, she occasionally produced a quirky surprise: typical was her history of the Carr family biscuit firm in (1997). Between 1977 and 1980 she was chief non-fiction reviewer for the London From 1973 she kept a diary – but only every five years, explaining that the changes recorded in this way were so dramatic that they enhanced the interest. In 1975 she was elected a Fellow of the Royal Society of Literature. Her biography of Elizabeth Barrett Browning won the Royal Society of Literature award for 1988. She married Hunter Davies in 1960; he survives her with a son and two daughters, including the writer Caitlin Davies.