Assad: we will fight until we have all of Syria

Turkey threatens to open the gates to EU for Syrian exodus 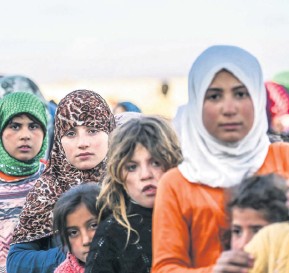 BASHAR AL-ASSAD has poured cold water over the international community’s hard-fought efforts to win a ceasefire in Syria, saying he intended to carry on fighting until he had returned the entire country to his control. Mr Assad said the “political” and “military” tracks to end the war were separate, meaning he would keep up his attempts to win the war even if peace talks went ahead. “We have fully believed in negotiations and political action,” he told the French news agency AFP. “However, if we negotiate, it does not mean we stop fighting terrorism.” He said he could retake all the territory he had lost in less than a year if supply lines to the rebels from Turkey, Iraq and Jordan were cut, but otherwise “the solution will take a long time and will incur a heavy price”. In the interview he added: “It makes no sense for us to say that we will give up any part.” There was no response to his words from his Russian backers, who early on Friday morning had struck a deal with the United States to demand a ceasefire within a week. Russia has been bombarding north and west Syria in support of a regime advance against the rebels. Under their cover, pro-regime forces, many of them Shia militias recruited from as far afield as Afghanistan, have cut off Aleppo from the northern border with Turkey. Russia and the US had claimed a ceasefire would give space for the rebels to come to the negotiating table with the Assad regime. The Russians demanded it start on March 1, but the Americans wanted an immediate cessation of hostilities to stop further advances. The compromise was hammered out at a security conference in Munich. The participants, who did not include any Syrians, also proposed a deal to allow humanitarian aid to be delivered to besieged areas. There was immediate scepticism as to whether the ceasefire had any chance of success. It excludes Islamic State of Iraq and the Levant (Isil) and the local alQaeda affiliate, Jabhat al-Nusra, on the grounds that they are UN-designated terrorists. This means that in effect the Russian bombing campaign can continue, since it says it is targeting these factions. The opposition’s negotiating team, the High Negotiating Committee, reacted cautiously. It has been put under pressure by the US and other backers to agree to full peace talks in Geneva. The HNC spokesman, Salem Meslet, said: “We must see action on the ground and if we see action and implementation we will see you soon in Geneva.” Philip Hammond, the Foreign Secretary, who met the leader of the HNC, Riyad Hijab, for talks last week, said the ball was in Russia and Mr Assad’s court. “It will only succeed if there is a major change of behaviour by the Syrian regime and its supporters,” he said. Meanwhile Turkey’s president is threatening to “open the gates” and allow hundreds of thousands of refugees to cross into Europe. Recep Tayyip Erdogan said the EU had not delivered the €3billion (£2.3 billion) in aid promised for halting the tide of refugees. In a speech in Ankara on Thursday, Mr Erdogan said the Turkish government was being taken for “idiots” by Brussels and insisted he was “proud” of leaked minutes of a meeting with EU leaders in which he had threatened to flood the Continent with refugees. Mr Erdogan’s country is struggling with more than 2.5million refugees on its soil. Nato on Thursday deployed a taskforce of battleships to the Greek coast to collect intelligence and, for the first time, return any stranded refugee vessels they intercept back to Turkey. Under a deal organised by the EU’s leadership and backed by the British government, Mr Erdogan was to be offered €3 billion in aid in exchange for halting the flow of boats. But the cash has been delayed by disputes among European leaders and several thousand migrants a day still make the short crossing over the Aegean. “I am proud of what I said. We have defended the rights of Turkey and the refugees. And we told them: ‘Sorry, we will open the doors and say “goodbye” to the migrants’, ” Mr Erdogan said. He added that his government was preparing for an exodus of 600,000. “The €3billion is not in our budget. Where has it gone? We do not have the word ‘ idiot’ written on our foreheads,” Mr Edogan said. and did not reply. He waived his right to give an opening statement to the court. Mr Schwarzbaum, a former art dealer who now lives in Berlin, survived Auschwitz but lost 35 members of his family in the Holocaust. “It’s about justice for me,” Mr Schwarzbaum said before he entered court. “I’ll look into his eyes and see if he’s honest. I don’t want revenge, don’t want him tormented in prison. He’s just an old man like me. But I cannot forgive him.” The prosecution alleges that Mr Hanning was among SS guards who selected which prisoners arriving on the notorious “ramp” at Auschwitz by train in the “Hungarian action” of 1944 would be allowed to live as slave labourers and which would be sent directly to the gas chambers. Germany has been accused of doing too little to bring Holocaust perpetrators to justice. Of around 6,500 SS members who served at Auschwitz and survived the war, only 50 have ever been convicted in Germany. The German courts had long maintained that only the senior Nazis could be held responsible for the crimes of the Holocaust. But that was overturned in 2011 when John Demnjanjuk, a former SS guard, was found guilty of being an accessory to the murder of 27,900 people at the Sobibor camp. Mr Hanning’s trial continues.