By Justin Huggler in Bad Aibling Bildnewspaper. The Virgin and Child with Saint Anne. Baptist The Telegraph. St John the 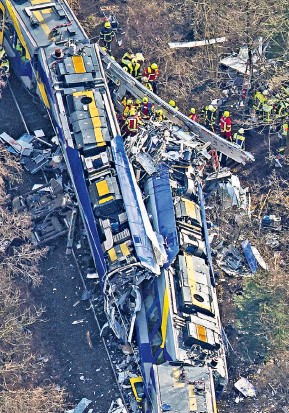 AT LEAST 11 people were killed and more than 100 injured when two trains collided head-on in Bavaria last week in Germany’s worst crash in a decade. German authorities said the cause was unclear. But questions were being asked over how an emergency braking system designed to prevent just such a collision had failed. “People flew through the air like dolls,” one passenger, Dennis, told “Everywhere there was screaming. It was terrible.” The collision took place last Tuesday at 6.48am local time between two trains on a stretch of single track just outside the spa town of Bad Aibling. One was full of commuters heading to work in Munich, while the other was carrying those returning from night shifts. Usually the trains are packed with children on their way to school, but it was a local holiday. Investigators were trying to discover how the trains entered the stretch of single track at the same time, when they were supposed to pass in the town of Kolbermoor. “The train braked sharply and then the lights went out,” a passenger, Patrick B, told Rosenheim24, a news website. “People were calling for help from all sides.” He pulled the emergency switch for the door and called emergency services on his mobile phone. “We took all the passengers we could onto the siding. We couldn’t move one man who had a broken leg. Then the emergency services arrived,” he said. The crash took place on a stretch between a canal and a steep wooded slope, which hampered rescue efforts. The most seriously hurt were taken to hospital by helicopter, while rescuers used blow torches to cut survivors from the wreckage. At least 18 passengers were seriously injured and 90 suffered minor injuries. As night fell, rescue workers were still searching for a missing passenger. Stefan Sonntag, regional police spokesman, said police had “little more than hope” of finding the person alive. Trains usually travel on the stretch at up to 100kmh (62mph). The two drivers would probably not have seen each other as they were rounding a curve just before the crash. One train had been derailed, leaving the carriages a twisted mass of blue and yellow metal. Alexander Dobrindt, the German transport minister, said: “These images are a very heavy emotional burden, because you can’t imagine such an accident can happen.” The inquiry will look at how an advanced automatic braking system designed to prevent head-on collisions failed to trigger. While Germany’s high-speed lines use a computerised system, slower local lines such as the one near Bad Aibling use PZB90, a magnetic system that has been in operation since 2012. The trains carry black boxes which could help explain what happened. So far, two of three boxes carried by the two trains have been found. after Ségolène Bergeon Langle, the Louvre’s director of conservation, resigned after a botched restoration of Da Vinci’s During the cleaning, original paint was removed and features on the face of the Virgin were changed. Michael Daley, director of restoration watchdog ArtWatch UK, said there was “no evidence” could be cleaned safely given the Louvre’s recent history. “The restoration has to be deplored just by virtue of what they did on the last Leonardo,” he told “One simply can’t trust them to do a good job.” Mr Daley said curators were increasingly in favour of restoration, however, meaning the phenomenon “is growing when it should be slowing”. “It’s to a curator’s advantage to restore a major painting like a Leonardo because it’s meant to count as art historical research and it creates excitement around the painting,” he said. Vincent Delieuvin, the Louvre’s director of conservation for Italian 16th-century painting, said some of the painting’s details “are now in the dark while 10 or 20 years ago, they were visible”.