Investors rush for ‘safe havens’ as markets go into turmoil 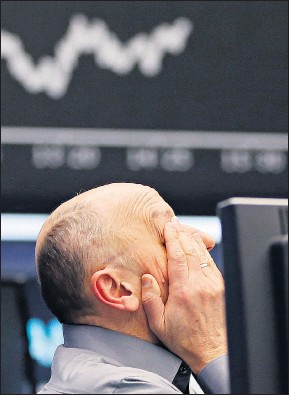 PANIC-STRICKEN investors sought out the shelter of haven assets last week as world markets were gripped by several days of tumult. Money poured into the safest government debt on Thursday, pushing down borrowing costs in Britain to their lowest recorded levels and sparking demand for gold, as global equities finished in the red for the fourth consecutive day of trading. In the UK, the benchmark yield on 10-year gilts dropped to 1.226pc – their lowest point since records began in the 17th century. Returns on US treasury bonds also plummeted to their lowest since the start of 2015. Amid the stock rout, gold rallied to its highest level since February 2015 to $1,263.90 an ounce. Gold neared the technical definition of a bull market, having risen by nearly 20pc since hitting lows in 2014, making it the best performing commodity of the year. Analysts warned that markets were in the grip of a “self-reinforcing death spiral” driven by anxiety that the world’s central banks were losing their fight against insipid inflation despite resorting to an eightyear stretch of unprecedented stimulus measures. These fears were crystallised by the Swedish central bank’s shock move to slash its interest rate to -0.5pc on Thursday. The Riksbank, on a drive to push down its currency, said the measures were necessary to stoke growth and inflation, but admitted they would trigger retaliatory moves by rival central banks in a global “race to the bottom”. The Swedish rate cut sent ripples across global equity markets. Britain’s FTSE 100 saw another £35bn wiped off its value, as it finished the day down 2.4pc at a threeand-half-year low of 5,536.97. The benchmark index had bled £80bn in the week – down 22pc from its peak last April. It was followed in the red by France’s CAC 40, down 4.1pc, and Germany’s DAX index, off 2.9pc. Europe’s embattled banks were repeatedly in the eye of the selling storm. The Euro Stoxx 600 Index of leading banks has lost a third of its value this year and is languishing at levels last seen at the height of the eurozone’s debt crisis in 2012. France’s Société Générale was the biggest casualty of Thursday’s selloff, losing 12.57pc after missing its profits target for the fourth quarter. SocGen’s woes highlighted the threat of negative interest rates on bank profitability, as lenders are penalised for parking reserves at the central banks. In the US, investment bank giants Citigroup and Bank of America fell by more than 6pc in early trading on Thursday, helping to push the Dow Jones Industrial Index down by 300 points. The Dow closed down 254.56 points at 15,660.18. Earlier in the week, Deutsche Bank shares tumbled – by Tuesday they had fallen 46pc since the start of the year. John Cryan, chief executive, had to come out publicly to claim Deutsche Bank is “rock-solid” following the dramatic drop in shares. The price rallied afterwards. “Markets really have not discovered anything about banks over the past three months they didn’t know before,” said Marchel Alexandrovich, senior Europe economist at Jefferies. “What is really happening is that the markets have stopped believing central banks can generate inflation. This becomes a self-reinforcing death spiral.” The Bank of England is expected to cut interest rates later this year, while the European Central Bank is walking a tight-rope between slashing rates further – escalating fears over the banks – or ramping up its contentious quantitative easing. By THE head of the British arm of one of the worlds’ biggest pharmaceuticals companies has said he would “not want to be a cancer patient in England” – as a 12-week consultation on changing the way patients get access to breakthrough cancer drugs draws to a close. Erik Nordkamp, managing director of Pfizer UK, said the Government’s proposals on reforming the cancer drugs fund failed patients and “set the clock back five years”. He said England already had one of the worst outcomes for cancer patients among rich nations. And it was also one of the worst countries in the world at getting breakthrough drugs to those who need them. The cancer drugs fund was set up in 2011 to gives patients access to new treatments rejected by the National Institute for Health and Care Excellence (Nice), which decides what drugs can be used by the NHS. The fund expires in April and under government plans, the cancer drugs fund will be overseen by Nice. But Mr Nordkamp criticised these proposals as a “wasted opportunity” because they fall short of radical reform. Nice’s methodology for approving drugs hasn’t kept up with the advances in medical technology, he believes.