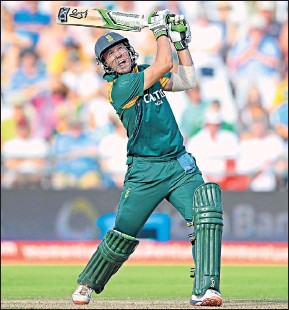 Fifth ODI relish the challenge of a winnertakes-all decider in Cape Town on the occasion of his 200th one-day international. By keeping his head and batting sensibly his South Africa team became the first side since 2005, and only the third of all time, to come back from 2-0 down in a five-match ODI series and win 3-2. This was not a De Villiers show of six-hitting strength. There were none of the superhero strokes of his 31-ball hundred a year ago. Instead he batted within himself, realising he had to stay in to take his team home. His 101 off 97 balls was his 24th ODI century but his slowest for four years. It was the perfect example to England’s young players that sometimes even the best hitters of a cricket ball can bat in a lower gear. De Villiers brought up his hundred with a dabbed single to third man and raised his fist to the dressing room in celebration. The job was done. In the next over England were beaten with 36 balls to spare. It was hard on Alex Hales. By making a hundred earlier in the day Hales became the first England batsman, and only third of all time, to score a half-century in every innings of a five-match series. His total tally of 383 runs is also the best by an England batsman in a fivematch series and a timely reminder of his talent after a poor first Test series as Alastair Cook’s opening partner. Hales stood alone as a succession of partners gifted their wickets. England’s dynamic approach to one-day cricket has been a welcome revelation but sometimes defence and patience are the route to a winning score and they left runs out in the middle by being bowled out. It enabled South Africa to get away with a frenetic display with the ball. It was a good tactic to be aggressive with the short stuff and bowl quickly at Joe Root, a batsman they have allowed to settle too easily in the series. However, the bowlers became carried away on a surface where disciplined lines and length would have been enough to create chances. In the end they often took wickets with bad balls, the exception being Kagiso Rabada when he set up Jos Buttler beautifully. The England man expected a short ball but had his stumps splattered by a full-length delivery as Rabada knocked over two big hitters in two balls. The first had been Ben Stokes, bowled around his legs, ending the highest stand of the England innings. Eoin Morgan had already given his wicket away when he charged at a wide ball and was caught behind leaving him with a series average of 12.80. Jason Roy has batted selflessly in this series and should be forgiven a lean run of scores. He was lbw for eight playing back and missing a leg break from Imran Tahir. Hales at first found timing difficult on a pitch that had been dampened by overnight rain. He brought up his 50 by almost chopping on his stumps and was given out caught behind on 21 but overturned a shocking decision from the umpire Johan Cloete on review. Hales deserved his luck and while batting with Stokes played some wonderful cuts and drives as his touch returned. He also realised he had to temper the big strokes when he started to run out of partners. Moeen Ali drove to cover, Adil Rashid tried to hit over the top and was caught at mid-off having already hit two fours in the over and Chris Woakes flicked a leg-side half-volley straight down the throat of the boundary fielder as the lower order let the innings slip away. Stuart Broad realised he had to hang around with Hales and was at the crease when his Nottinghamshire team-mate reached his hundred. Having been dismissed for 99 in Port Elizabeth there were a few wobbles when he was one short of a century but he went on to make his best one-day international score before Hales too perished playing a big shot, caught pulling a short ball to deep midwicket. England needed early wickets and Reece Topley gave them hope making the ball swing. He had Quinton de Kock caught behind on review, bowled Faf du Plessis first ball and Rilee Rossouw was caught by a short extra cover shrewdly placed by Morgan. However, Hashim Amla and De Villiers have won many matches for South Africa and theirs was the stand England had to break. They put on 125 in 23 overs using all their big-match experience as Morgan turned to Broad for a breakthrough almost bowling him out by the 27th over. Eventually Amla was stumped charging Moeen. Rashid had Farhaan Behardien caught at mid-on but the all-rounder David Wiese supported his captain to complete a one-sided victory. The result here in Cape Town left England ruing their moments of madness at the Wanderers on Friday night when they let the series slip from their grasp.