Players face being sent off in fight against indiscipline 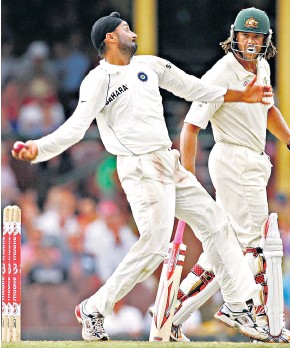 know anecdotally that player behaviour seems to be on the wane in cricket, certainly in this country,” Fraser Stewart, the MCC’s head of laws, told “Statistics from leagues show there are increased numbers of players being reported. Last summer, five games had to be abandoned due to varying degrees of violence. That is an increase, for sure. It was felt that now was a good time to review this whole area.” The MCC, the guardian of the laws of the game, will be trialling these sanctions in its own matches this summer, which will include university cricket, although not games against county sides. The MCC is hoping leagues will join in the trial with a view to the sanctions being introduced when it publishes redrafted laws of the game in 2017. The decision to introduce the scheme to professional cricket would be made by the relevant national boards and the International Cricket Council, but they could follow suit if the MCC trial is deemed a success. “Following a global consultation in 2015, the majority of umpires felt they would be better able to control player behaviour if they had more power to deal with the problem during the game, rather than through a reporting procedure afterwards,” Stewart said. “The benefit of this is that the offence has a consequence in that particular game, rather than in the following weeks, or the following season. “The hope is the added deterrents will make players realise they can’t behave in a poor way. We will trial it in MCC university games over the summer and hope various leagues and schools will help out and we can then examine end-ofseason reports to judge its success. Reports show that behaviour at schools level is an issue, not violence but lots of chat and loud, persistent sledging. The umpires will have to make a call on what is sledging and what is banter.” Last summer, a man in his 60s was taken to hospital and a man in his 40s arrested after a fourth XI match between Basildon and Pitsea and Stanford-Le-Hope in the Shepherd Neame Essex Cricket League ended in a punch- up. A few weeks later a match in Pembrokeshire had to be abandoned when a fight developed between players from Saundersfoot and Kilgetty cricket clubs. Trouble was sparked by a sledging incident. A bowler was punched unconscious and a man arrested when a match between Swindon Civil Service and Beanacre and Melksham descended into a fight. In Shropshire, a match was abandoned when a dismissed batsman from Prees struck a bowler from Church Streeton. The worst recent incident happened in Bermuda, where a batsman was given a life ban after a horrific attack on a fellow player that was captured on film. It is those kind of incidents that the MCC hopes will be curbed if the trial is a success and becomes part of the laws. Individual leagues will decide whether umpires actually brandish red or yellow cards. In New Zealand last year, there was a trial of yellow and red cards and they were deemed a useful deterrent which led to a significant reduction in bad behaviour.