England grind out win to keep revival on track 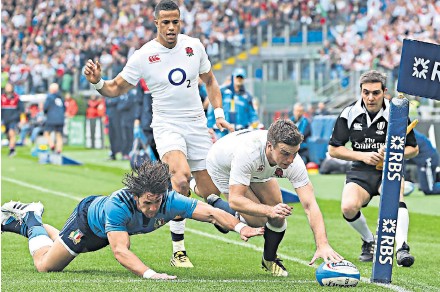 Italy damned by the results of their World Cup, so credit should be duly given for what the bare statistics tells you is a rattling start to the 2016 RBS Six Nations Championship: two wins away from home and back-to-back fixtures to come at Twickenham, with Ireland first. England have lost only one of their past 11 games in the tournament. They are contenders if still far from strutting like champions. They are grafters, though, tight-knit, onmessage and relishing each other’s company. Good things can follow from such foundations. There are enough ruins in this city to know that Jones’s regime could already have been reduced to rubble if there had been slip-ups. The scoreboard might indicate a thrashing but Italy were feisty and clever, terribly handicapped by the loss of three players to injury in the first half alone, two of them, Marco Fuser and Alessandro Zanni, hulking forwards. Sergio Parisse, a bruising weal under his right eye, was as colossal as ever, while the Exeter centre Michele Campagnaro confirmed his burgeoning reputation as one of the most consummate performers on the international stage. Italy have never beaten England but they threatened on every front before fading. England made Italy look careworn in that telling period. It was a measure of England’s worth that it was so, not a sign of intrinsic frailty in Italian rugby. The England edifice still needs several layers of construction. There were line-out glitches, turnovers conceded and a lack of early fluency. They also conceded 13 penalties, and were slightly fortunate that James Haskell was not sent to the sin-bin for a tackle in the air on the full-back Luke McLean. It was a marginal hit but there has been zero tolerance on such transgressions. Dan Cole was also involved in one skirmish, while captain Dylan Hartley escaped censure for a swinging arm at a ruck. Yet once again there was a sense that it would come right, as it had at Murrayfield. That inner sense of togetherness is not easily manufactured or acquired. England have got something. That Italy gifted the break-through try to England, Joseph latching on to the end of several shovelled passes across the 22, to snatch the ball and race to the try-line, was the sort of error that was bound to happen once England’s fresh legs began to exert pressure. The dam breached, the white shirts came pouring through. There was a brief Italian uprising in the closing stages, with Campagnaro to the fore, but England held firm. They are not going to give up without a rare old fight. If anyone does beat England, they will have to earn their spoils. The bench made all the difference. Care was terrifically sharp and busy, his pace and finely tuned instincts serving his team so well. His deft grubber through for Joseph’s second try was blue-riband quality. Joseph was the stand-out name on the scoresheet. The Bath centre might have had to toil in club colours but he has shown that Jones was right to resist the lobby for Daly’s inclusion. In defence as much as in attack, Joseph is replicating his 2015 form. His third try showed he has strength to go with his skill. Farrell rounded off matters, much to his delight, punching the air as he touched down, the try owing so much to the powerful and classy intervention of replacement hooker, Jamie George. His 21-year-old club team-mate, Itoje, has had to live with swirling hype these past few days. He was used as a blindside flanker, and was involved for the duration of his 25minute shift. Itoje brings energy and intelligence in equal measure. Ford had scored England’s opener in the 25th minute, reward for the accuracy of his aerial bomb kick that was followed up aggressively by Joseph and Mike Brown. It took England a long time to capitalise on that score but in the end they did. They have every reason to be satisfied with their return.