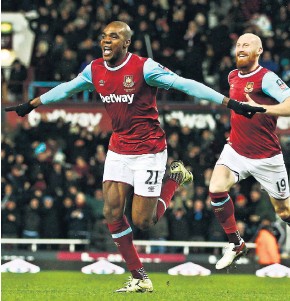 FA Cup West Ham United being played at the end of the second period of extra time. Dimitri Payet sent one more good ball towards the far post and Ogbonna, the Italy international, planted his header beyond Simon Mignolet. It saved West Ham from penalties and it denied Christian Benteke the chance to redeem himself. With Daniel Sturridge back on the pitch as a second-half substitute – his first football since Dec 16 – Liverpool’s Belgian striker contrived to miss from just about every angle conceivable. When he was unmarked in the box, he struck it wide; clean through on goal and he fluffed his lines. “Every striker has these times,” bemoaned Klopp, but he cannot afford for his £32million man to have too many. The return of Sturridge was the best news of the night for Liverpool, but so too the performance of a team of rookies and irregulars against a strong West Ham side. There were times, especially at the start of the second half, when you thought Liverpool might just win it and the likes of Jon Flanagan and Brad Smith gave good performances, although perhaps the lack of experience told in the end. Bilic said West Ham would do everything in their power to keep Payet, who is negotiating a new deal and will surely be of interest to wealthier clubs come the summer. It was a splendid night of FA Cup football and if the tie at Blackburn is not one that either manager particularly needed in a hectic schedule these two sides fought each other long into the night for the right to that trip to Ewood Park. Klopp opted for his traditional FA Cup combination of an inexperienced defence and midfield, building up towards a much more seasoned attacked that included Philippe Coutinho, Benteke and Jordon Ibe. There were 10 changes from the side who drew 2-2 with Sunderland the previous Saturday, with only Mignolet retained. He was more reliable in the first half and may even have got the slightest of glove-brushes on Payet’s swerving free-kick on 38 minutes that struck a post. Whether he did or not, he was back on his feet to push away the follow-up header from Michail Antonio. West Ham had hit a post in the 16th minute when O’Brien found himself in unfamiliar territory in the Liverpool area and struck a heavily deflected shot that hit a post. Liverpool came closest before the break when Reid gave the ball away and Benteke and Coutinho combined, only for the latter to strike a post with his shot. Mignolet had just kept out Antonio’s follow-up effort from Payet’s free-kick when the 25-year-old Englishman finished powerfully from Valencia’s cross for the game’s first goal. Liverpool were back in it within three minutes of the second half starting, shortly after Benteke tried to force his way through a group of West Ham shirts on the edge of the area and Kouyaté brought him down. The free-kick looked inviting even before referee East insisted the wall stand so far back their presence was virtually immaterial – but then they jumped in anticipation and Coutinho’s shot ran under them and found the corner of the net that Darren Randolph could not reach. It was an embarrassment for Bilic and his players and they seemed to feel it as Liverpool started to exert themselves. West Ham should have had a penalty on 66 minutes when Thiago Ilori pulled down Valencia. By the end of the 90 minutes – with eight added on for the treatment to Kouyaté – it had turned into the reckless kind of FA Cup tie in which risks were being taken. In extra time, Liverpool had the best chances and it was Benteke who missed them. The first came from a header upwards by Sturridge that dropped perfectly for the Belgian and he missed the goal altogether with his right-foot shot. A minute later he went through on goal and could not get the ball past Randolph, who had done well to get out quickly. Then Payet was given his chance to deliver from the right, and Ogbonna did the rest.