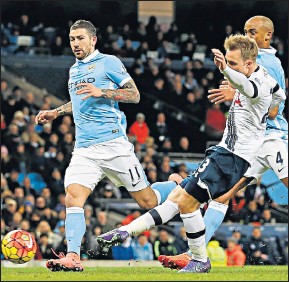 Manchester City that is an achievement for Spurs, even if only two of them could be said to be bona fide Spurs academy graduates. Their first goal, scored by Kane from the penalty spot on 52 minutes, was the result of a very questionable decision by referee Mark Clattenburg. He judged that Raheem Sterling had handled when he turned his back on a Rose cross, the referee indicating that the arm was in what he considered an unnatural position at the time of impact. Manuel Pellegrini tried his best to keep a lid on his emotions but struggled as he watches the title drift away in this, his last season. He said tersely that he “congratulated” the fourth official Mike Dean on Clattenburg’s decision and criticised the decision to appoint the referee to the game given his decisions against City in the corresponding fixture at White Hart Lane in September. For Pellegrini, the considerable shadow of Pep Guardiola must be a very cold place indeed. After Kane’s penalty his side equalised through substitute Kelechi Iheanacho, only for Spurs to score again when the home team were in the ascendant. This is their second successive home defeat, including against Leicester City, since the Guardiola announcement was made. It was not a penalty but Kane tucked it away, and for the first time in the game, City seriously came alive. Iheanacho’s equaliser 22 minutes later was his ninth of the season and City were on top when Eriksen – who turned 24 on Sunday – broke away for a winner that was made by substitute Érik Lamela. They had not dominated the entire game, but Spurs are a team confident enough to boss big teams even away from home, especially teams like City, where the confidence is at a low ebb and not all the big names are performing. For much of the first half, the tide of the game was in Tottenham’s favour, with territory and possession conceded by the home side. Having said that, the best chances of the first half were City’s when they managed to orchestrate something, mainly through David Silva who would miss the last chance to equalise in injury time at the end of the game. Sergio Agüero had half chances either side of half-time, but could not score either. Before half-time, the only true opening for Pochettino’s side was on 23 minutes when Rose, then Son moved the ball quickly from left to centre to create the space for a right-footed Eriksen shot that Joe Hart was equal to. There was a clumsy late tackle on Yaya Touré by Dier before the halftime whistle, which earned the latter a booking, much to his chagrin given the leniency shown towards the City midfielder on earlier occasions. The award of the Spurs penalty on 52 minutes, well taken by Kane, infuriated City and they responded almost immediately. Touré hit the bar with a free-kick. The equaliser was worked down the left with Gaël Clichy exchanging passes with Silva and crossing for Iheanacho. At that point, it was Pellegrini’s side who looked the more likely to win but Pochettino made the bold decision to bring Lamela on for Alli and the Argentine gave his side fresh legs, breaking from midfield to play in Eriksen, who was played onside by Vincent Kompany, and scored brilliantly. Spurs came to the Etihad in 2010 and claimed a Champions League place at the expense of City with Peter Crouch’s winner – this felt even bigger. Their seventh straight victory has at least given them the chance to compete in the title race, for the first time in a generation.