How Made.com went from billiondollar idea to fighting for survival 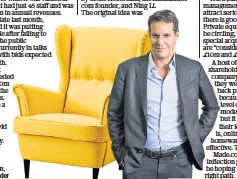 Philippe Chainieux was certain of one thing. “Made.com is at an inflection point,” he enthused down a crackly phone line in early summer last year. The online retailer, known for its plush velvet sofas and Instagramworthy homeware had announced plans for a £1bn float in London days earlier. If there were any nerves, they didn’t show. Chainieux, chief executive at the time, declared confidently: “I’d say it is the same kind of inflection point we might have seen five or 10 years ago in fashion or electronics. We have this strong foundation, we are at scale, we are growing fast and we are profitable. We think this is the right moment to accelerate.” Less than a year and a half later, it turns out Chainieux was right: Made. com had been at an inflection point. Unfortunately, it was not the one he was hoping for. The business debuted on the London Stock Exchange with a £775m valuation in June 2021, less than the £1bn it shot for, and it has only been downhill from there. In the short time since listing, Made.com has issued three profit warnings and lost both Chainieux, as chief executive, and its chief financial officer. The business is now worth just £33m, similar to what it was valued at in 2012 when it had just 45 staff and was making £15.6m in annual revenues. Ultimately, late last month, Made.com said it was putting itself up for sale after failing to raise cash on the public markets. It is currently in talks with buyers, with bids expected later this month. Last week it admitted it needed as much as £70m to survive for the next 18 months. “It has been a pretty catastrophic year,” says David Reynolds, an analyst at Davy. Some of the company’s problems have been out of its control. The cost of living crisis has caused spending on big ticket-items such as beds and sofas – Made.com’s stock in trade – to drop off dramatically. But company observers say there are also self-inflicted problems. “In many ways, it’s a case study in how not to do an IPO,” says Reynolds. “I told Adrian Evans [former CFO] a number of times that the golden rule for the finance chief of a publicly-listed company is that you under-promise and over-deliver.” Evans, he says, did the opposite, spurred on by venture capitalists and private equity keen for big pay days. Despite the optimistic projections at the time of the listing, there were signs that pressure lay ahead. Haulage prices for transporting its furniture were on the rise and backlogs were growing at the borders. Both were significant issues given Made.com sources stock from countries such as Vietnam. “For some reason they just didn’t seem to be aware,” says Reynolds. “This is a company that got way too ambitious and believed its their own publicity, and actually the last thing they needed was an economic retrenchment.” Made.com was founded 12 years ago by Brent Hoberman, the Lastminute. com founder, and Ning Li. The original idea was to use advances in tech to allow people to visualise what furniture would look like in their homes before they bought it, which Hoberman said was “probably one of [his] best ideas”. Items were at sourced from the likes of The Conran Shop, Heal’s and Furniture Village. Under Li, the company managed to attract customers with very little marketing as he had a “religious focus” on organic growth and keeping costs low, according to one early employee. Li stepped down as chief executive in 2017, to be replaced by Chainieux. The early employee believes the business has strayed from the path forged by Li since then. “What the recent management team did compared to when [Li] was running the business, you’ve got to say, were they doing that?” says the early employee. The company blames its current woes on two major headwinds: customers spending less amid the cost of living crunch; and “reduced reliability and increased costs” within supply chains. Analysts say the company should source more of its furniture from nearer-by to avoid supply turmoil. That may be a longer-term solution but more immediate fixes are needed now. Costs need to be cut and more than a third of Made.com’s 700 workers have been told their jobs are at risk. “We knew a restructuring was coming,” says one of those facing redundancy. “But, I was surprised. For my role, I wasn’t expecting it.” It is a painful process but one that management believes is necessary to attract serious backers. Sources say there is good interest in the business. Private equity firms are understood to be circling, while one City insider says special acquisition vehicles, or Spacs, are “considering a deal with between £10m and £20m of cash plus debt”. A host of Made.com’s pre-float shareholders also still own part of the company. “I wouldn’t be surprised if they were considering taking it back private,” says Reynolds. “Not because they’ve got a particular level of faith in the business model or the management team, but it will allow them to mitigate their losses – and really, the thing is, online does work, and homeware and furniture will be effective. This is not a lost cause.” Made.com is once again at an inflection point. This time, bosses will be hoping it puts them back on the right path.