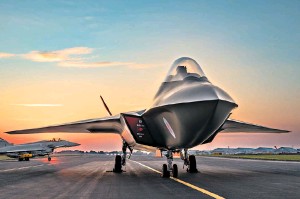 Inside a room about the size of a lecture hall on the outskirts of Edinburgh, scientists are putting the latest radar destined for British-made fighter jets through its paces. It is sealed shut with 30-foot high metal doors and with walls lined with foam spikes in order to test the new equipment accurately. This is the testing hall for the European Common Radar System Mk 2, a £2.4bn upgrade to Britain’s jet fighter fleet’s eyes in the sky and a stepping stone to the next generation of radar which will be fitted in the nose of the planned Tempest fighter jet. The site was built by British engineering firm Ferranti in just 18 weeks in 1943 to make gun sights for the Supermarine Spitfire fighter plane, ushering the job out of Manchester which was a target for German bombing raids. It is now run by Italian defence contractor Leonardo after a series of mergers in the defence industry. Its engineers aim to meld radar with various other electronic eyes and artificial intelligence to be able to detect and deal with threats long before a pilot notices them in encounters where every second counts for the next generation of radar, due to be released with the Tempest next-generation fighter in 2035. “The first you’ll know about a threat being dealt with is that it will tell you,” says Andrew Howard, director of major air programmes at Leonardo. Pilots will still be “very much in the loop. But in some circumstances you’re the weakest link in the loop because your capacity to absorb information so you make a decision is seconds that you might not have. In this generation, in certain circumstances, the system will look after you.” Capability like this will only be used defensively, for instance in destroying a missile, he adds. To get there, Leonardo will have to design a system that can manage vast amounts of information – traffic comparable to Edinburgh’s internet usage at any given moment – and use huge processing power to detect missiles, enemy jets and other hardware, determining accurately what they are by using data harvested from previous encounters. The point is also to gather enough information to map a battlefield with as few sorties as possible, from as far away as possible, minimising pilot danger. The challenge is managing the energy it will need, as well as placing sensors on a stealth jet without ruining its stealthy nature. In the meantime, the ECRS Mk2, due to be deployed by the end of the decade, will help pilots prioritise information “based on the sort of fidelity of the data you know, so they’ll do this task because the data is really good”, says Mark Hamilton, managing director electronics UK at Leonardo. Radar development started in the 19th century, but its use became most apparent in the Battle of Britain where it was deployed to detect aircraft from 100 miles away. The basic principle is in sending out a pulse of radio waves and seeing how long they take to bounce back, says Prof David Stupples, a radar expert at the School of Science and Technology of City, University of London. More sophisticated systems can then tell a pilot the height of the target, its speed and how big it is, he says. Since airborne radar was invented, rival military powers have played a game of cat and mouse in trying to hide their planes from radar detection while developing radar to spot their enemies. Stealth planes are generally angular, a quality that can deflect radar pulses at a distance, says Prof Stupples. They are also coated with materials that can absorb radio waves. To detect stealth jets, a number of radar sensors can be deployed at once to reduce the effectiveness of this deflection. The other cat and mouse game is in avoiding being detected yourself when blasting out electromagnetic waves from your own radar, he adds. “For military radars, the holy grail is to have low probability of intercept radar, which means I can see the target with my radar, but the target can’t see my radar,” he says. The latest radars employ grids of antennae in a so-called phased array to build up a picture. Radar development is cloaked in secrecy – the exact parameters of the new radar system will not be made public and the layout of the antenna grid on Leonardo’s latest model is kept from prying eyes. Since the Second World War, radar detection has gone from dozens of miles to hundreds and from detecting and tracking one target to 50 or 60. Adding to that is a suite of cameras and infrared detectors and a broad 110-degree sweep of detection means the system can “see things that we just simply couldn’t have conceived of, even 10 years ago”. The BBC has been using Leonardo’s thermal imaging cameras since 2013 to film animals such as bats at night and the company’s technology has been used in cricket to detect whether a ball has struck bat or batsman in the Decision Review System. “It’ll see more at a further range at a faster speed than a generation ago. So more pilots will survive in more difficult circumstances than would have been the case a generation ago. And you’ll need less aircraft to do dangerous things,” says Howard. For big targets, a fighter jet over Edinburgh should be able to detect a target over London, says Hamilton, making much quicker engagement possible.